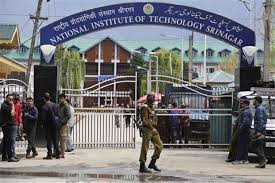 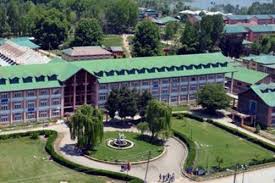 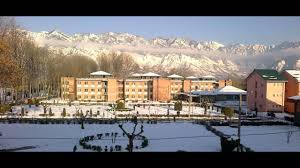 REC,Srinagar ( now NIT ) was established in 1960. Kashmir was dar-ul-harab then .The period between 1985-95 saw Kashmir being cleansed of ‘infidel’  presence by resorting to  targeted killings and forced migrations.More than 2 lakh Kashmiri pandits(99 percent of the then Hindu population) were forced into mass exodus with the connivance of local  politicians ,administration and the vocal support of the majority .

The then Dilli Sarkars were  seized with mandal-kamandal matters . They looked away helplessly even  as ‘dar-ul-Islam’ was established in Kashmir .The political liberation of the Valley ,the red herring of Azadi was never a pragmatic option to begin with, neither is it now .It has just been a ploy to let India feel it in control of the situation ,and maybe feed our arrogance by boasting that Kashmir remains our inalienable part.The real objective was to purge  Kashmir of non-Muslims.

Slowly and steadily ,beginning from the day when  protests rocked the Sher-e-Kashmir Stadium in 1983 to the Pampore encounter in early 2016 when the locals  raised slogans in favour of Pakistan and Azadi,and against India ,and even tried to help the entrapped militants escape,situation has become very hostile . Burials of terrorists are attended by thousands, while a dead CM’s funeral cortege manages to attract just a few hundred.

It is in this context that the events of the NIT should be understood.Its neither about celebrating the loss of BCCI XI nor even wishing death to all Indians.This is far more serious.At a time when there are only 35000 Hindus (out of total 55lakh population) left in the valley ,one can imagine the kind of pressure these thousand or so ‘outsider’ NIT students would be under  at all times.Most of these students from outside the state must be Hindus by demographic logic . It is one thing to go abroad to study  in a Muslim country governed by Shariat,like in Saudi Arabia,but quite different to go to Kashmir which carries a lot of  burden of unresolved historical conflicts. In Kashmir,anti-Hindu violence dates back  to  15th century.The past three decades of ethnic cleansing,terrorism and insurgency and the recent events of Pampore don’t help matters much .Srinagar does not seem like a wise choice of a  place to live in and study.

Aspiring engineers studying in NIT took admission in the college on the basis of their JEE scores.They are not in Srinagar by choice,but by virtue of the fact that an NIT exists at that place. It is easy to attribute motives to these students now ,and question the intent behind their demands.A section of the media has hinted that all  this is a ploy to get NIT shifted out of Srinagar,or maybe secure admissions in their respective state NITs. So what is unreasonable about it ?

This is where the Centre should step in.The matter is too delicate to be left in the hands of the likes of Nirmal Singh and Mehbooba Mufti. NIT has now become a sitting duck , a prized trophy for  jihadis .Its a proud state institution and represents Indian higher education in its full glory. But relations between the outsiders and local students,faculty and canteen staff have been irreparably damaged.The situation might not become normal enough for a long time for the students to venture out of their campus. It is fair to assume that their lives are in danger. No one can study in such an environment .Given their recent history , neither local politicians ,nor the police can be trusted beyond a point . Gilani has talked about offering Kashmiri hospitality in a very sweet voice.This raises my hackles ,as it should be considered as a veiled threat – a signal to jihadis,or even locals.

The PM should keep in mind that these students are not soldiers.They have not signed up for war.Their parents have not sent them to give away their lives. They represent all classes and regions.Their lives are more precious than the hollow rhetoric of ‘secularism’ or  Kashmir being an ‘inalienable part’ of india. Even the armed forces were caught napping in Pathankot and Pampore.  BJP might get badly hurt if something untoward happens in the NIT. The risk is not worth it. Keep the NIT in Srinagar,if u dont want to be seen as weak,but transfer these students for heaven’s sake .There is no other way.The state can afford to step back right now without losing face.It should not wait for another disaster to strike.