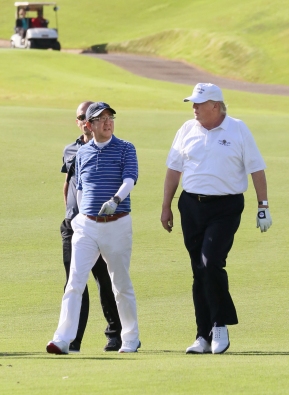 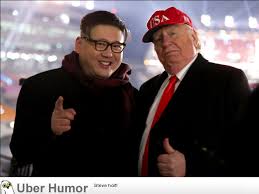 To check if Kim Jong Un would press nuclear button in distress or in panic mode,Trump made him an Administrator in a WhatsApp Group boasting of the US President ,Putin,Xi,Moon Jae-in,Duerte,NaMo,BiBi Netanyahu,MBS,Rouhani,Abe,Al-assad,Sisi,Macron,Trudeau and whoever runs the show in Pakistan,and some other global leaders as its members.Goes without saying ,the leaders of P-5 were also  admins in this  group.The group was formed with a view to develop  personal rapport with each other and  discuss global matters in an informal environment .As is usually the case,a lot of miscellaneous topics and personal banter  also flew around in the group.

Trump and his friend ,a new entrant,Schinzo Abe, repeatedly  poked  Kim that fateful night ,as Japan took on Belgium in a World Cup KO match.Traffic on the  group was high,quality football was being played and  a lot of leaders were cued in. Trump didn’t like Belgium,`those appeasing bastards’,as he referred to them .He was in his elements,overexcited and exuberant,while Abe was quite nervous.Kim could somehow never stand the posh, priggish Abe,who  was  drunk by the time  team  had scored two early goals  in the second half.By now,Trump was typing abuses and expletives at a lightening pace,and Abe joined the slanderfest .But why did they have to hurl personal jibes at  Kim ?What about the recent bonhomie at Singapore? Wasn’t Kim trying for a rapproachment with Japan as well ?Trump perhaps enjoys taking  potshots at his buddies.Thats his style.As for  Abe ,shelted under the American nuclear umbrella,he must have felt emboldened to take liberties with his friend’s friend.That ugly-faced,foul tongued oldie  called him a  fatso ! How dare he ! Kim was furious.  Hadnt The Onion labelled Kim as the sexiest man alive some time back  ? Well,he could still bear this vile treahchery on  Donald’s part.They had shared soiled underwears in Singpore,and had later exhibited them as evidences that US and PRK could work together .Agreed Trump  could be a bit too touchy-feely-paly for comfort ,but didn’t he tell Kim that  together the two of them could take on a bear and beat it too ! But inexplicably ,the  Mosquito-faced Abe,in cahoots with his friend Donny  was ganging up against him ?This was a betrayal he could not tolerate.

Kim turned a  shade yellower if that were possible,then the colours of his face changed from red to crimson and  finally became  purple in anger as the duo kept nagging,harmlessly as they thought,playfully as it were.It was a boy’s group afterall,they had purposely left Mama Merkel and Aunty May out of it.The duo didn’t give a damn about the sensitivities of poor Kim.The drunken revelry had gone too far for his comfort.

Now Kim   was quite conscious ,nay finicky,about his personal hygiene as well as public image.(He had shared UGs only with Trump and not Abe and that was a sacrifice he had made for his people).He had modelled himself on Putin,getting photographed while tracking on mountains and standing by his missiles.Kim  was used  to a lot of cheap bluster about his nukes and rockets, threatening the US ,South Korea and Japan with  Apocalypse.He  had a low fuse,and a tendency to blow up without  enough charge,and there is doubt is he knows or accepts this fact .He was also not used to being picked upon,being the son  of the Revolutionary Leader.In his own mind ,he was a just,sensible and mature human being and the Leader ,the world needed.

He followed some basic  rules,some of them quite time-tested.Like Krishna,who allowed a  rogue cousin Sisupal his ninety-nine calumnies before he hurled his chakra at him and slit his throat.Kim didn’t  like that  Krishna had issued a public warning.He himself counted  silently,but never announced his intent to seek retribution.This made him feel like a Sicilian. Kim did consider himself  divine,if not  God himself,but times had changed.This was the age of Kali,in which  social media beings dwelt upon the earth.

In such beings,  an urge once  born is incapable of being denied by the brain.Fingers follow this urge and start typing,brain does not come into the picture.Social media actions now run on reflexes,quite bypassing the brain.Fingers have a pace, and logic of their own,and the inherent human need to hurt or humiliate  someone,especially who one  considers soft or weak , overrules any sanity signal which brain might send.Fingers also love to  demonstrate their power over destinies of fellow group members.Human body language has changed with the advent of social media.Tapping fingers once denoted boredom or frustration.Now tapping fingers on a keyboard or a mobile might mean you are deeply engrossed in  fervent slandering of someone ,or carrying out a midnight coup..

Surely throwing someone out of a group for any reason whatsoever constitutes good sport.Kim must have had a lot of fun when he pressed the button to evict  Abe.Even Trump shrieked in glee when this played out.Leaders ,the world over,must have felt vindicated.This is what happens when nations are led by  mad men .But if three different admins are adding  back your victim  without any time leg,Kim must have checked  his step and reviewed his course.You don’t nuke for fun.You warn,confabulate.Not Kim.He believed if there are rockets in his armoury,they shud be launched at the first opportunity,and he did.Abe was thrown out not once,not twice but a staggering seven times that night.NaMo and Macaron,along with Trump, tried  adding him back,but to no avail. Kim went into a frenzied state and seemed hell bent on total destruction.NaMo screamed Armagaddon in deep horror, `there is some loop,machines have taken over’ ,he was heard shouting.Something’s gotta give.Trump  has promised Abe his nuclear umbrella.North Korea was breathing fire.Time was critical.Meanwhile Belgium had scored twice to level scores.

Trump  took his cue from Krishna .He  was besides himself with anger ,not because Abe had been thrown out,but because he had been thrown out seven times,ignoring global opinion, without the customary Krishna Warning,or Personal Message Diplomacy .To save Arjuna ,Krishna had to sacrifice Ghatotkacha to rid Karna of his Indra-Shakti.Trump had no recourse but to rid Kim of his admin’ship.This he did as disaster loomed on the horizon.

Did Trump betray  Kim ?He could have counterattacked with his nukes,or surgical strike to take Kim out and effect a regime change.But how many real friends can Trump boast of ? Kim was his pride,his trophy.He valued him almost as much as he loved Putin. Trump stayed calm and effected least possible (later repairable)damage to Kim ,while saving his friend Abe and Japan from oblivion.This was the first act of statesmanship Trump exhibited ,and the battlefield was a WhatsApp group.Abe felt drunk,nauseous and emasculated,and it didn’t  help that Belgium struck a third goal in the dying moments to send Japan packing  out of the World Cup.