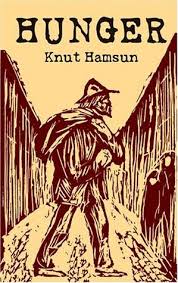 On the streets of Kristiania(Oslo), wandered a vagrant with intellectual pretensions and a self-devised code of chivalry. He managed to get published off and on in local papers. He blamed rejections, matters of rule rather than exception, to his own esoteric penmanship and baser tastes of the readers and publishers.

This not-quite-named protagonist reminds one of Dostoevsky’s Raskolnikov (the protagonist in Crime and Punishment) in his progressively decayed physical and mental health and loneliness,  which co-exist in a phantasmagoric  mix with essential goodness of character. This concoction is a recipe for disaster, especially as one could sense that he was on a slippery slope as the novel progressed. One is also reminded of  Joyce’s Stephen Dedalus, created about twenty years later (around 1914), but Stephen had managed to pull himself together physically and mentally and emerged as an artist with a coherent theory of aesthetics. Knut Hamsun consciously rejected realism and naturalism in and from  his writings,  and advocated that the intricacies of human mind should form the basis of literature. A novel should force us to listen to its characters’ ‘whisper of blood and pleadings of bone marrow’.

The decadence of modern civilisation, the human apathy and loneliness in a metro city (Oslo) take their toll upon the main character. No one left “the wondrous city before it made its mark upon them”. His encounters with certain minor characters like “Ylajali’’ , a near blind man reading a newspaper, his landlady, a clerk from whom he stole and the woman whom  he handed over this stolen money (and later forced her to give him cakes in lieu of that unrequited donation) are quite mysterious(nay eccentric) in nature,  yet presented in a humorous fashion. Infact there is a touch of sad resignation in these descriptions of the protagonists’ mental state. Mostly all action took place in the mind of the Vagrant and there is deliberate vagueness about the reality, and its authenticity. Perhaps, the author wished to point towards the relative importance of what the Protagonist believed to have happened, rather than the events which actually might have occured in the real world.

Hunger is great read, an absolute classic. For cynics, seekers of dark humour and lovers of Dostoevsky, Kafka and Joyce, it can be considered an essential read. Knut Hamsun was awarded the Nobel Prize in 1920, and must be considered an early exponent of the stream –of-consciousness genre which was later developed and championed by James Joyce and Virginia Woolf. Hamsun’s writing had a lot of spunk and style , which is reflected through the deeds and thoughts of Hunger’s unnamed protagonist.