I woke up with a start. This is just a matter of habit. I had no idea how long had I slept. I did not even retain the awareness of the room I was sleeping inside. Space and time have lost if not their whole meaning, then at least all importance. No one can go anywhere. No one is expected anywhere either. No distances can now be covered in no time.

“We are all just prisoners here, of our own device……”

Sun was still burning bright. Second week of April in Kolkata is supposed to be hot and humid like tropical hell. I had woken with a false sense of alarm. Crows were cawing like crazy. Were they seeking me out? In an ideal world, my presence should not matter to them, and their existence should not be my concern. 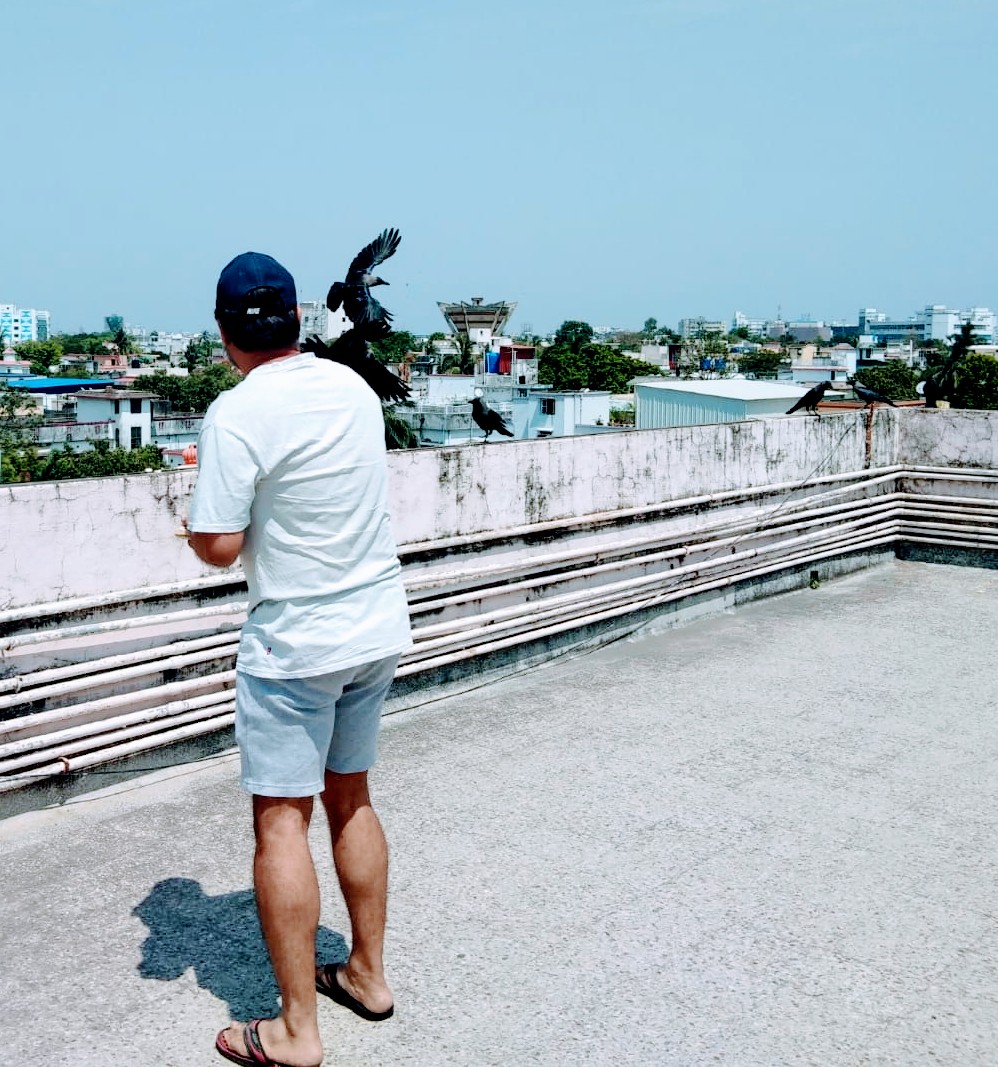 Alas, the state of the world is far from ideal. We are in the middle of a Coronavirus-forced national (maybe global) Lockdown. One dare not venture out of the flat for a smoke or a stroll. Defiance might invite death. The virus might be lurking somewhere, waiting inside human vessels, unseen, undetected, hungry, desperate to feed on our lungs. It is far safer to break the bed with joyous abandon-alone, if you are lucky; with someone, if you cannot make her vanish.

I am blessed to possess a large terrace over my head. Ever since I watched on TV a large number of migrant labourers rushing like ants  towards their homes , an irresistible urge to walk and walk has overtaken me. I began with visualizing, and then started having dreams of myself walking for long hours. It was during these long walkathons that I became acquainted with a murder of crows. We broke ice with some cottage cheese that had gone sour. I had forgotton to throw it, and hence made virtue out of necessity. 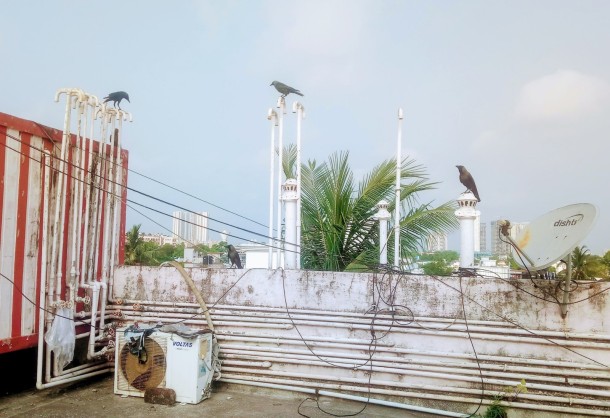 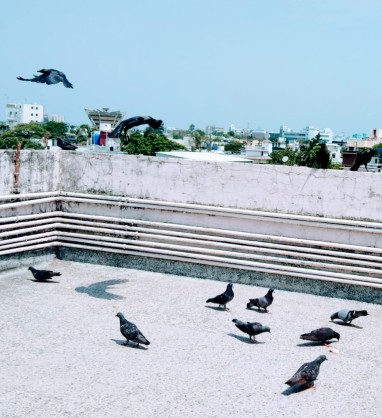 “Why not offer this paneer to the natural scavengers? They might partake of the delicacy and save me the trouble of going down to the society bin. After all they are known to devour carrions.” I was not prepared for their overeager responses. The moment I had placed some pieces on the parapet wall, more than a dozen crows came flying in from all directions. Cawing ferociously, breathing eagerly through semi-opened large black beaks, flapping their wings in anticipation as if some animal had perished, hopping all over the parapet and around me, their sudden arrival like a flight squadron shook me enough to raise my heckles. All the paneer was polished off in no time. Then they perched themselves on tallest of structures – gas pipes, dish antennas, water tank- all the while cawing, jumping around and watching me and the town around us with keen,piercing eyes.

Fluttering crows transported me to the passages in Bibek Debroy’s translation of Valmiki Ramayana wherein he compares Rama’s sidelocks with crow wings. I find it impossible to imagine crow-winged sidelocks on a divine countenance having lotus eyes and rose-like lips. Rama, Vaidehi and Laxman must have walked for thousands of miles during the course of their Vanvaas. I began walking with the trio on my terrace which resembles a concrete jungle, although surrounded by birds. Walking thousands of miles must have caused them blisters. There are boils on both my feet after just ten days of ten mile walks. Rama’s jungle track was documented and immortalized by Valmiki. Step Counter records my miles. This blog and the counter shall provide testimony that I did not play a slothful glutton during the Lockdown.

Humans have innate ability to fill their time with inanities, and creating semblance of business. I am now caught up in a routine of my own making. Walking, along with feeding and watching crows is not supposed to be productive work. But the tyranny of tacit commitment forces me to rush up to the terrace with bread crumbs and a leftover poori to feed my crow pals. Junk food gets crows pretty excited, anything oily is their weakness -that, and animal protein(cheese, paneer, egg, yolk or meat). Bread does not quite figure high on their preference list. But pigeons love bread crumbs and cereals! 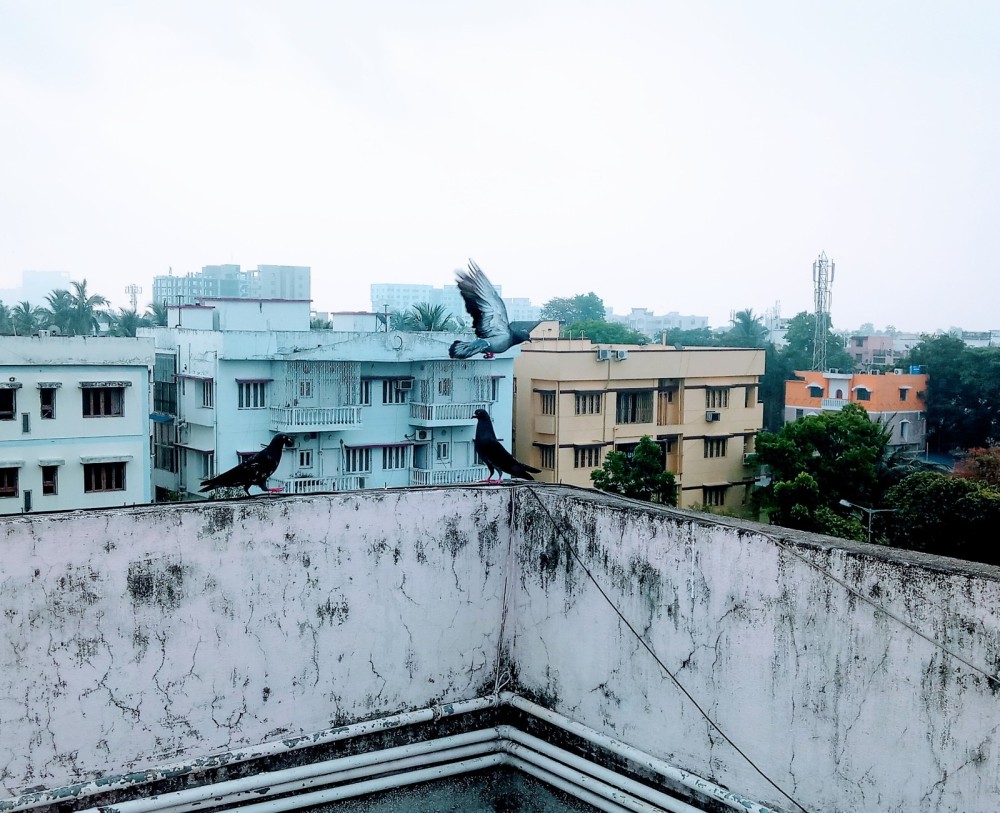 With small-sized pokey beaks, pigeons cannot take large bites. They end up spilling more than they eat. There is simply no comparison between the personalities of a keen crow and a goofy pigeon. To keep birds interested, I have also placed two water containers on the terrace. While crows have their fill, pigeons hop about circumspectly. They fritter away a lot of opportunities of eating or dipping their beaks, almost like an evasive child. Crows have a lot of pluck. They resist all attempts at photographing them. They can pick and hold not just a couple, but even four-five crumbs in their cavernous beaks. If only they had short hands, which seem to burst out of their plumes, they would have given human a run for their money ! Sometimes I even find mynas fooling around. They are smarter than pigeons ,  but not more so than crows. 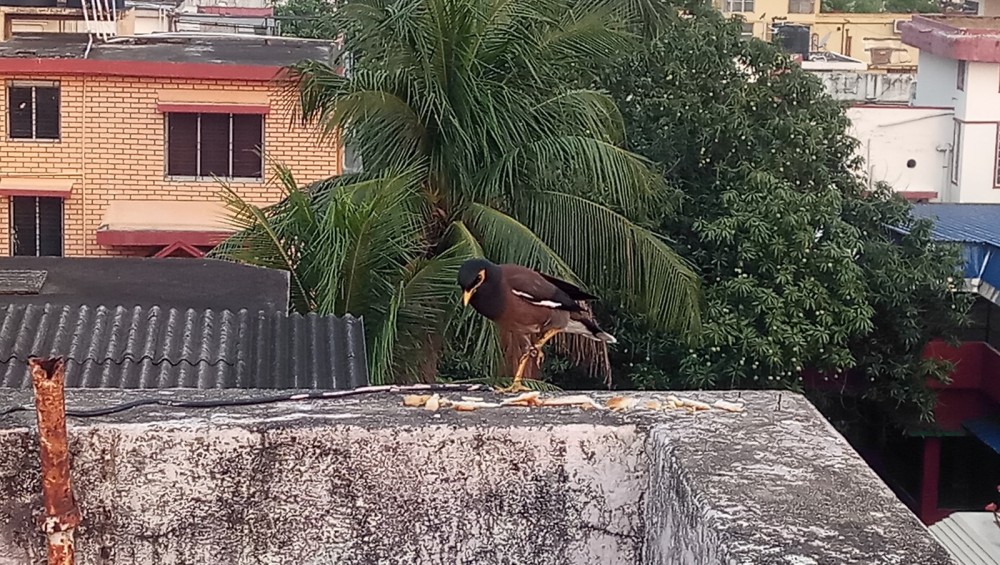 If the Lockdown gets extended further, I might attempt to learn basics of cawing (of crows) and cooing(of pigeons). If I keep walking everyday, someday soon I am going to break the marathon barrier. As for this period of tribulation and my account of it , I can only  quote Goswami Tulsidas –

If I list my faults, the tale grows long,

If hints will serve I can carry on. 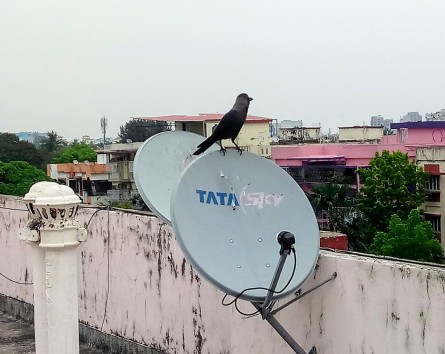 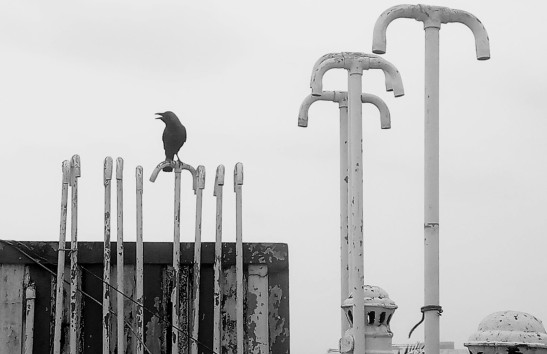 I will be back. There is a lot to write about. 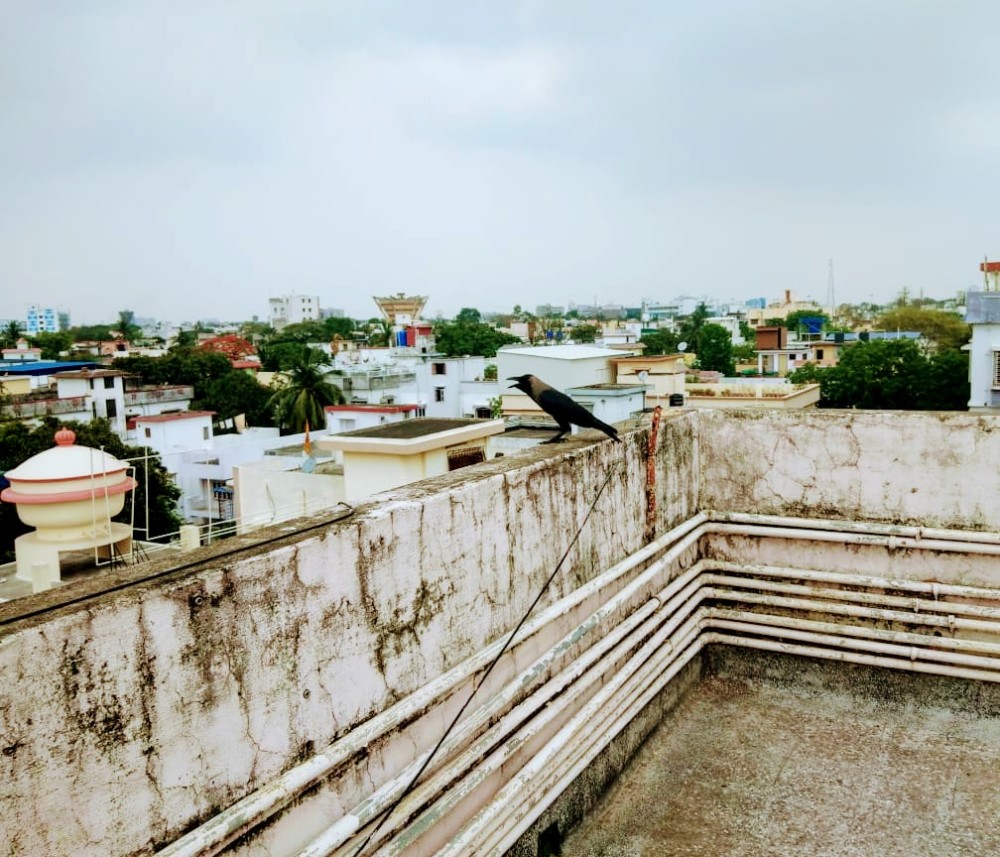