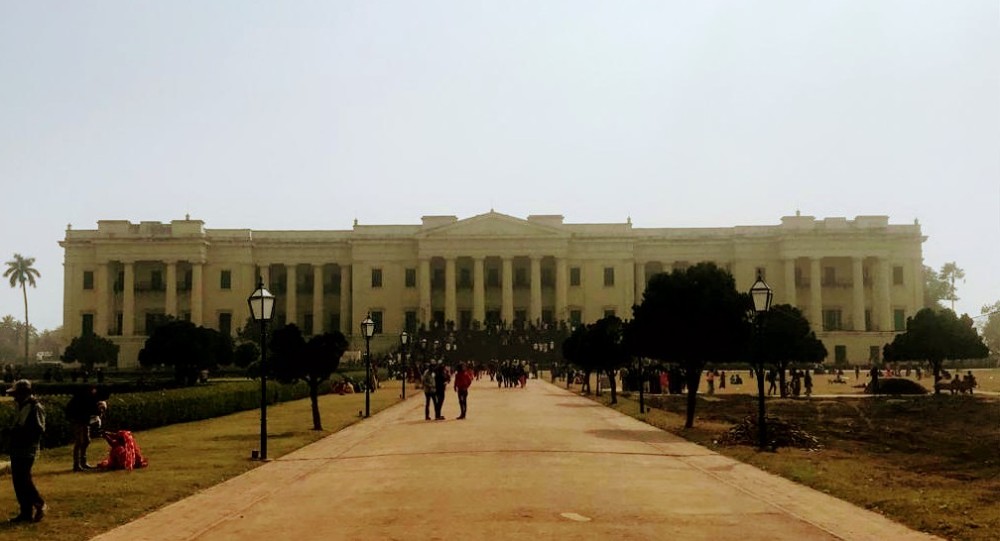 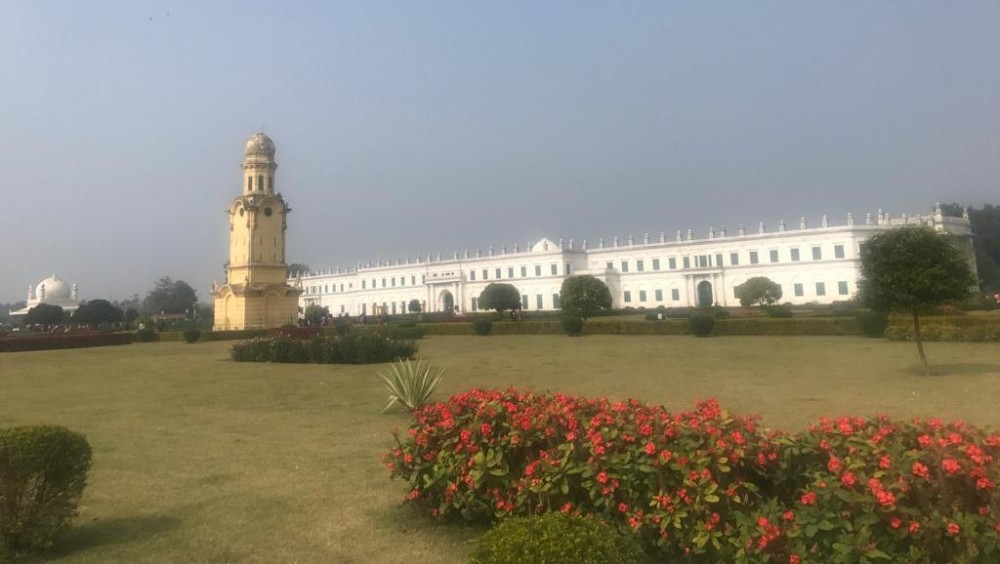 Located on the eastern bank of  Bhagirathi, the ancient channel of Ganga, Murshidabad was the capital of Nawab-Nazims of Bengal in the 18th century. It gradually lost its importance to Calcutta, but remained the seat of Nawab Bahadurs . I had read about the beauty of Hazaarduari Palace ,but was dissuaded from making the journey because of long distance (200 km) and bad condition of roads. 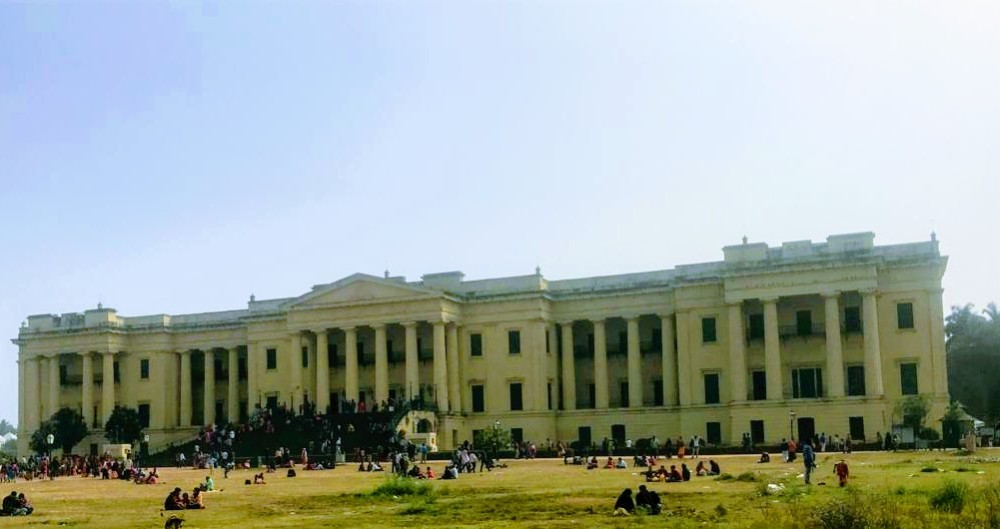 Then one day, I just hopped onto Hazaar Duari Express , which leaves Kolkata-Chitpur Railway Station at 6:50 am ,and reached the capital of Nawabs at 10.30.  As I stepped out of the station, an old world of horse-driven tumtums ,alongside jeeps and battery-run totos, greeted me. Murshidabad is caught in a time warp-  Nawabs are no longer to be seen anywhere, but also absent are even traces of modernity. 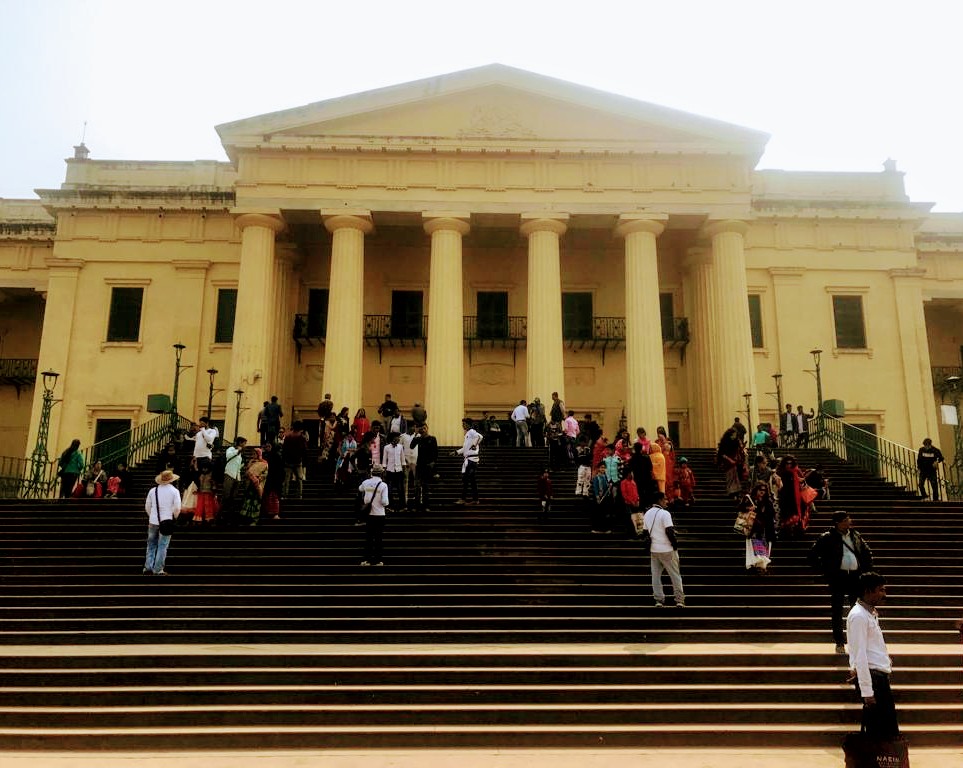 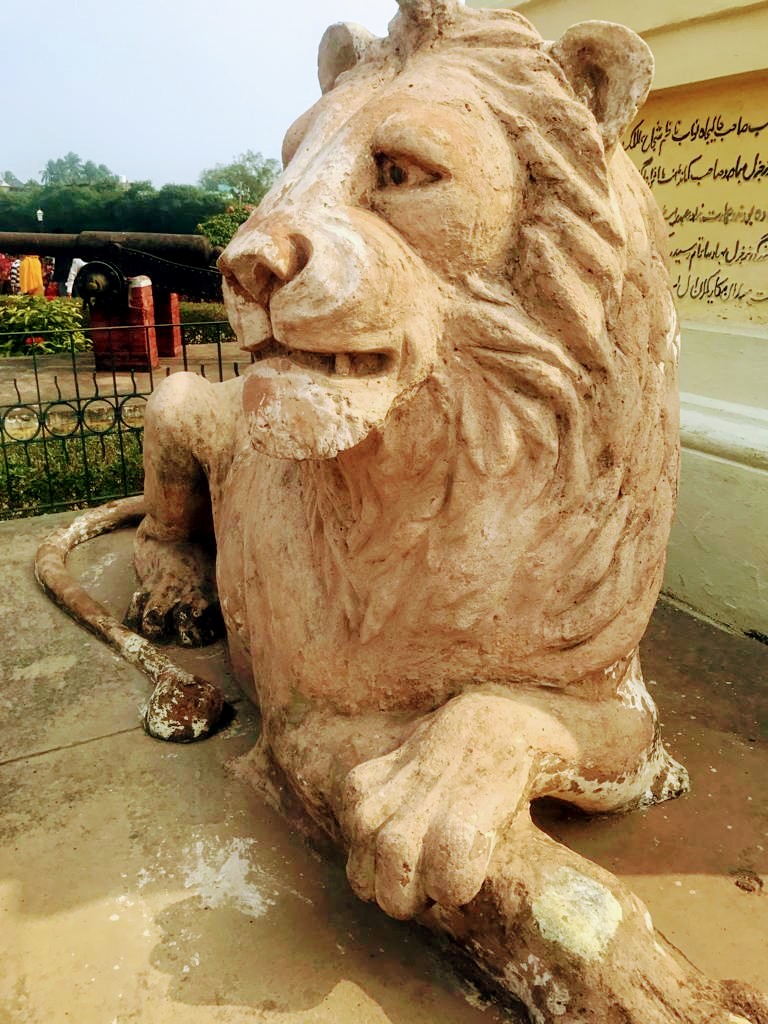 The  Palace is just 2km from the railway station. Upon entering the Qila Nizamat Complex, one gets to behold a breathtaking view of the Palace of Thousand Doors, Shahi Imambara, Clock-tower, Medina Masjid and  Yellow-coloured Zurud Masjid. 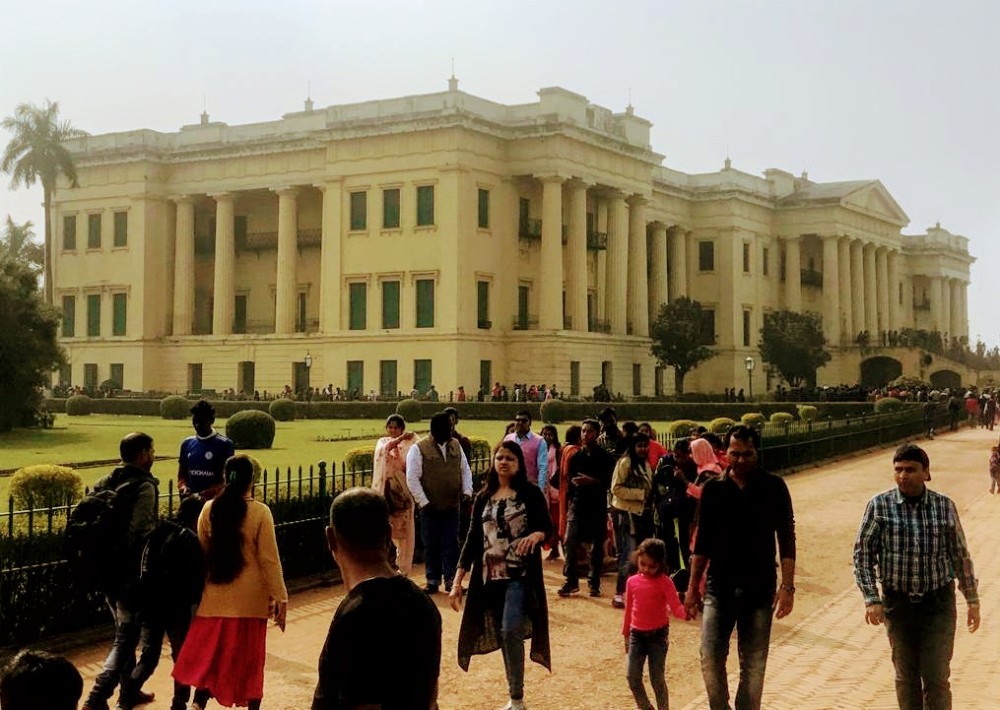 Hazaarduari , also known as Bada Kothi, was constructed between 1829-1837 by a British architect, Duncan McLeod  during the period of Nawab Nazim Humayun Jah. The Palace has a thousand doors , out of which  about one hundred are false ones to obfuscate an unsuspecting intruder. 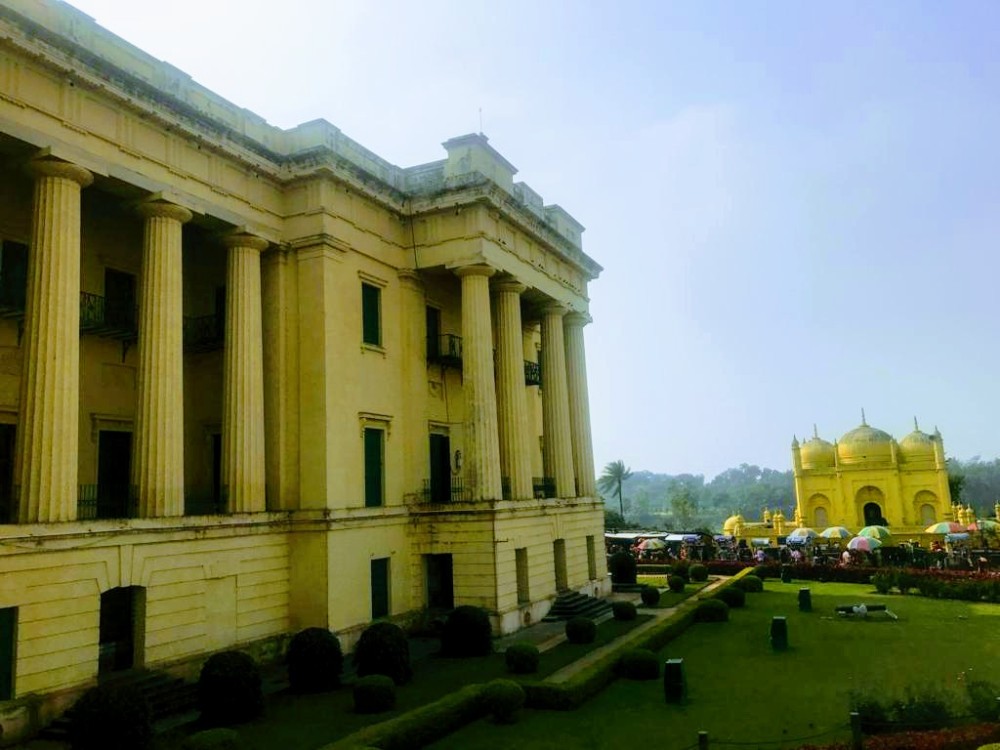 The palace is rectangular in plan and is a good example of Indo-European  architecture. The front façade of the Palace is approachable through a grand staircase, leading to a portico, supported by seven huge pillars. Two huge lions of Victorian masonry style , are seated on either side of the entrance of the grand staircase. Their expressions are perhaps the most aggressively vicious I have ever come across in any lion statue I have seen. 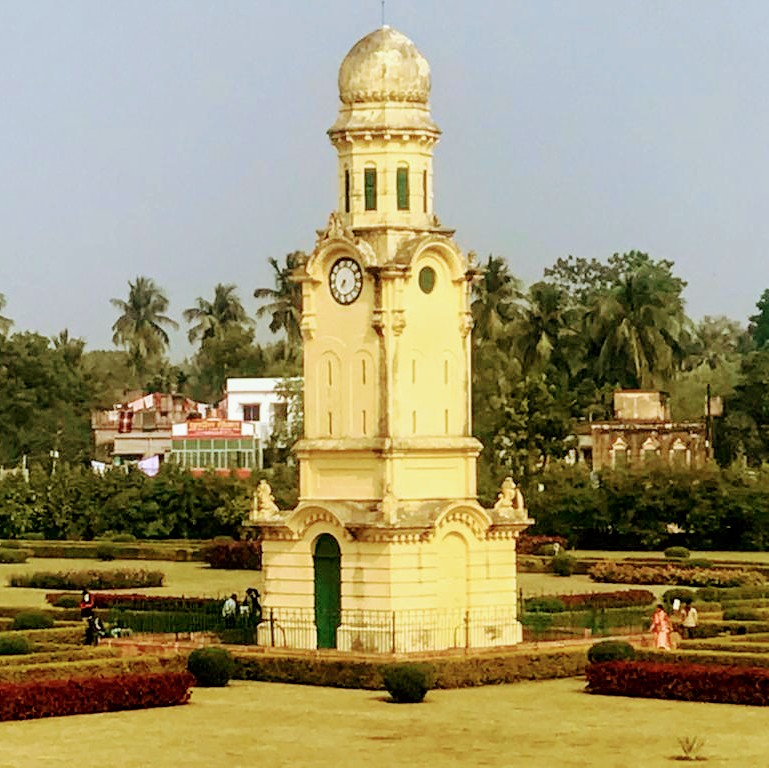 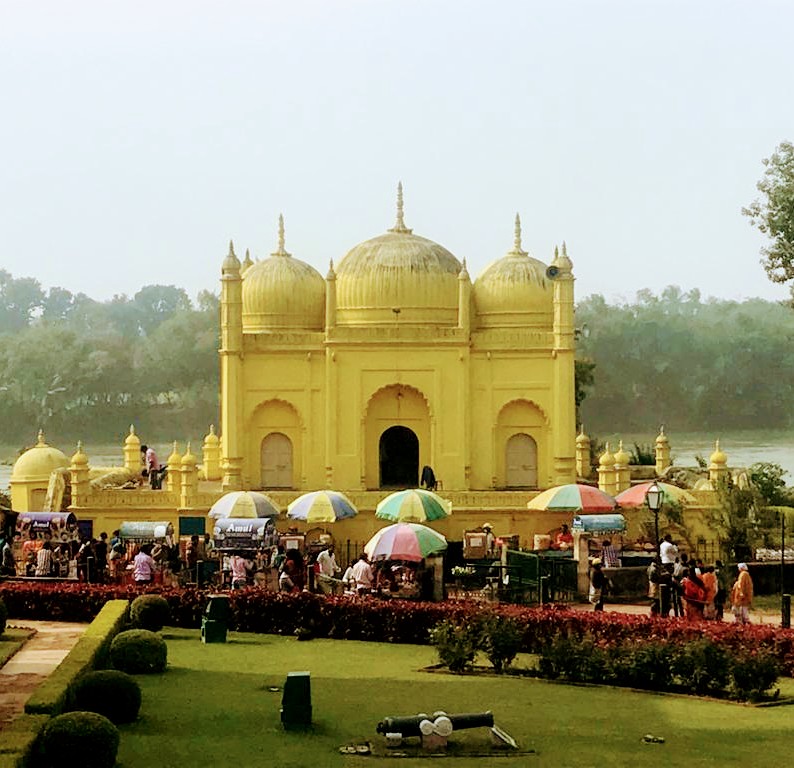 The palace has a score of galleries comprising of chandeliers, magic mirror, portraits , stuffed crocodile, artworks of glass and metal and items of daily use of the royal family. The Archaeological Survey of India took over the Palace for upkeep in 1985. 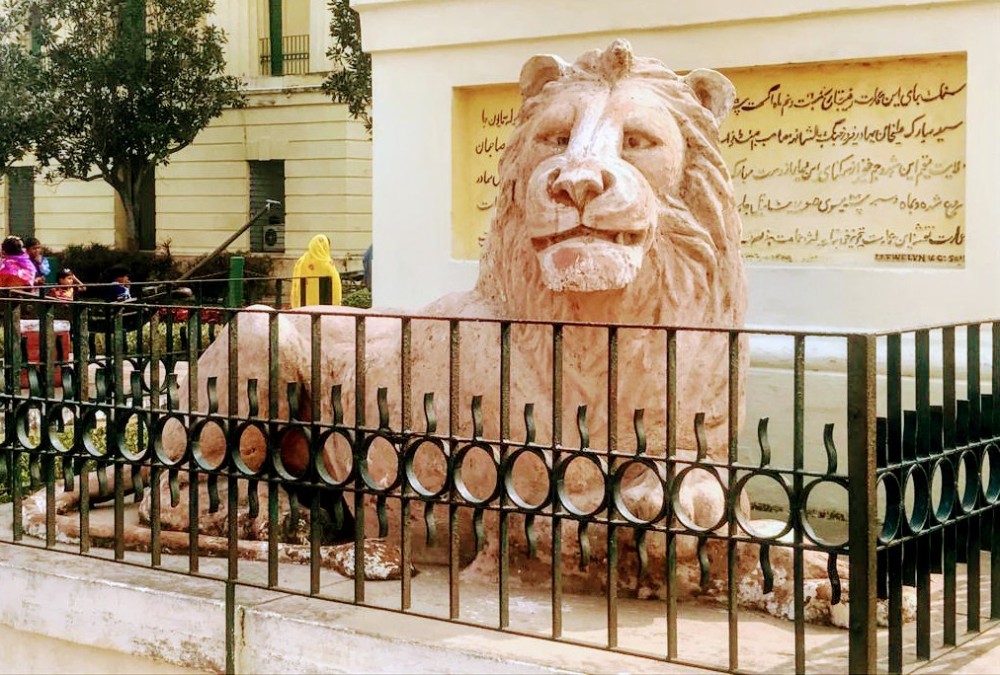 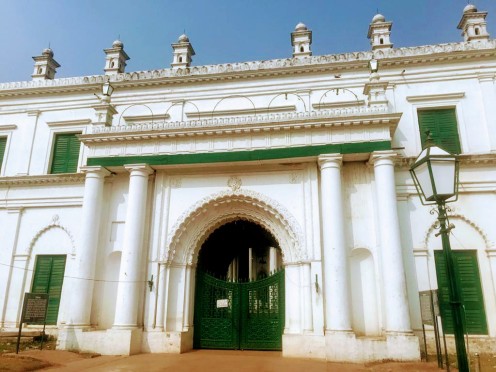 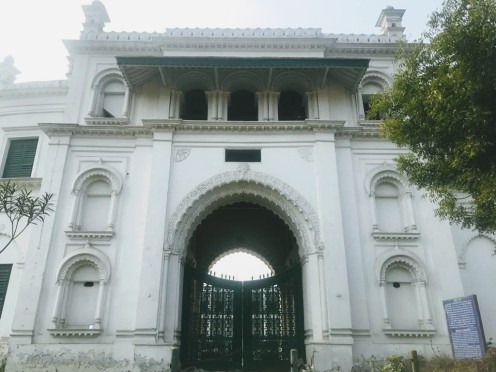 The Great Imambara, daubed in graceful white hues, stands opposite to the Palace. It was constructed in 1847 by the then Nawab-Nazim Fehradun Jah, in place of the old wooden imambara  which had been burnt down in a fire.

Medina Masjid, situated between the Imambara and the Palace is a small white structure .Soil  brought from Medina was added to its construction material, hence the name.

A Clock-tower also stands between the two grand structures, opposite the Medina Masjid. 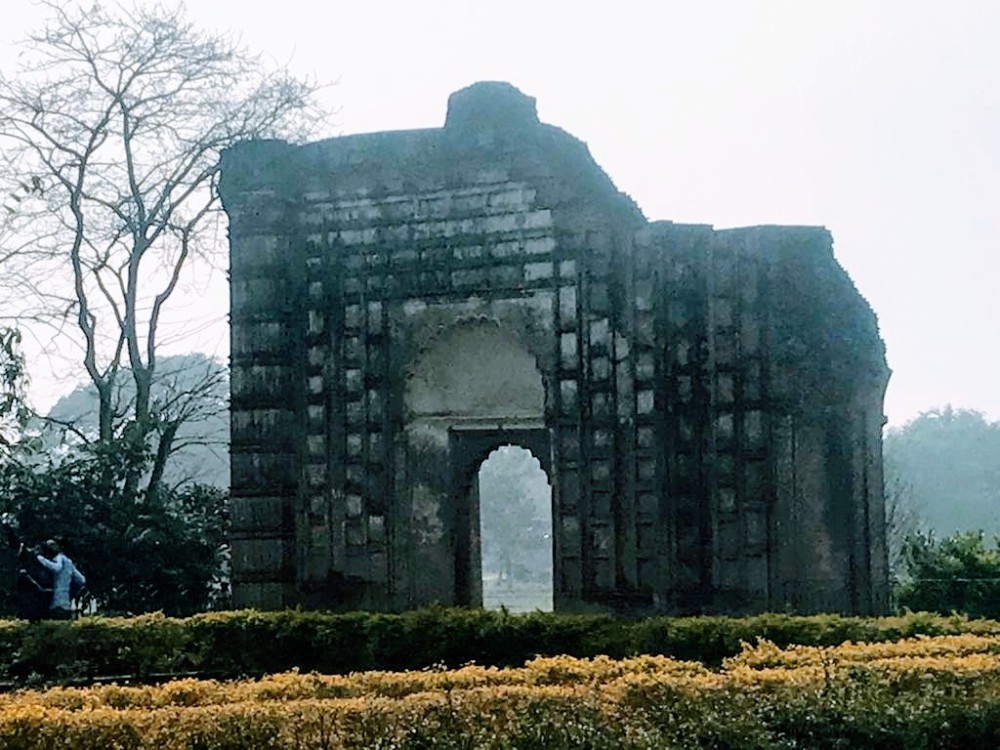 The ruins of  Tomb of Azimunnisa Begum (dated 1734 AD) are located near the Palace. She was the daughter of Murshid Quli Khan and wife of Shuja-ud-din. 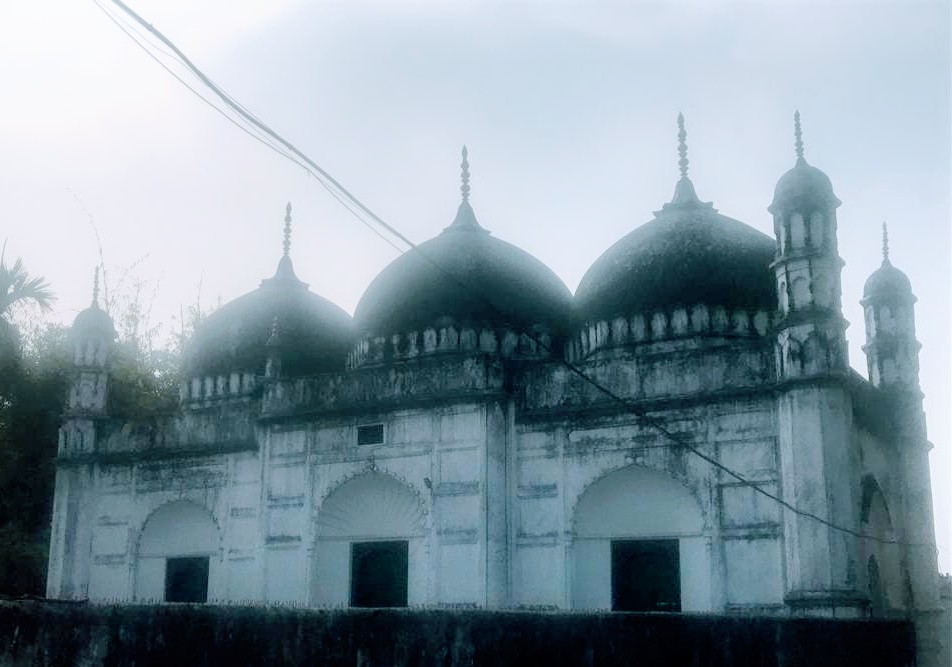 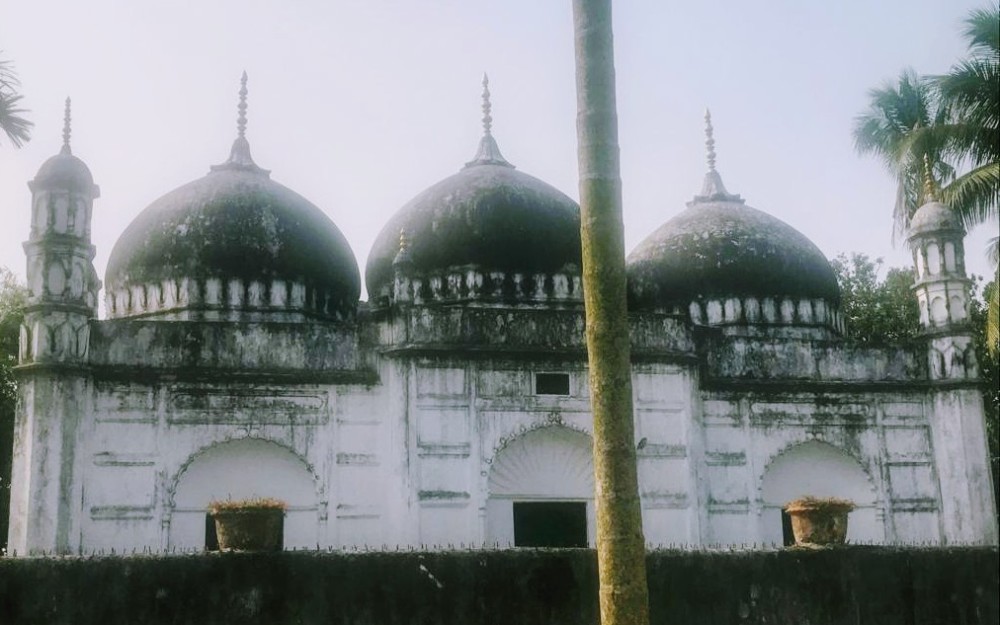 Five-domed,white-coloured Chawk masjid or Footi Masjid was built in 1767 by Munni Begum ,wife of Mir Jaffar. 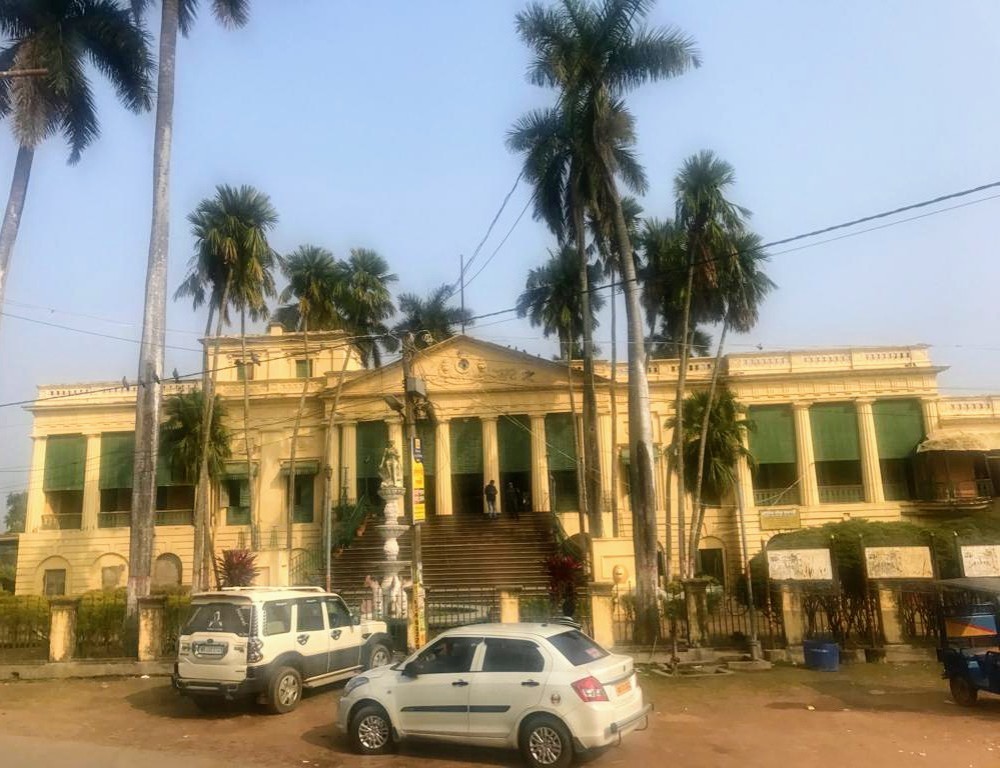 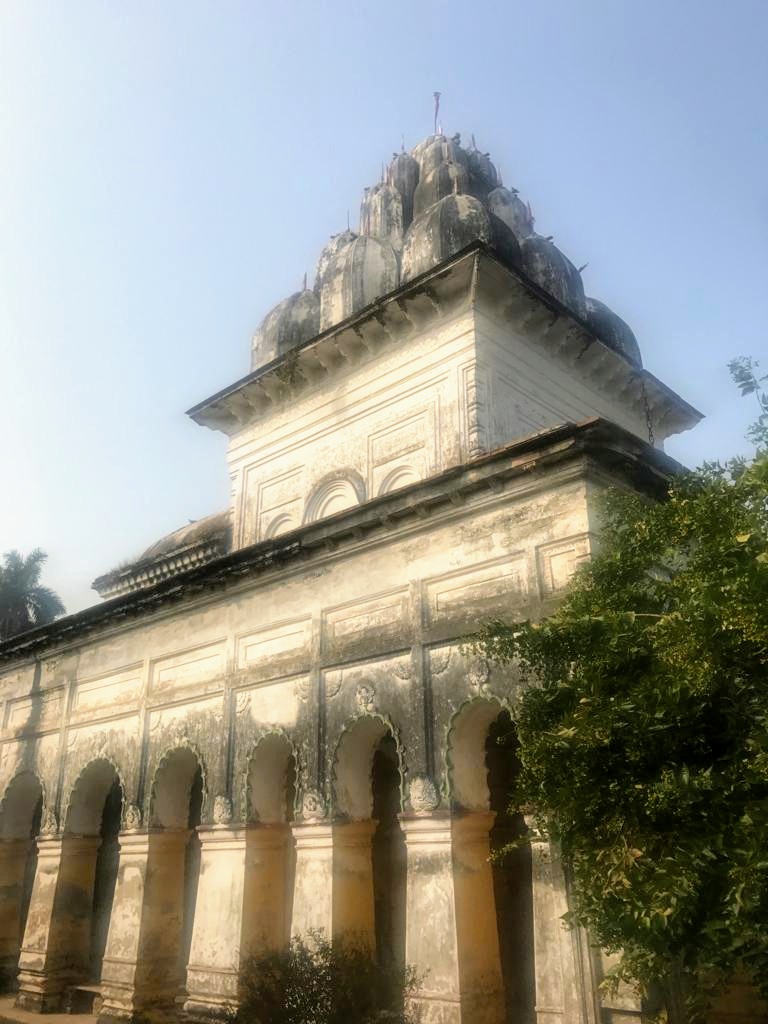 Nashipur Rajbari has a temple with compartments for many deities inside, a lot of documents , art gallery and items of daily use. The Rajbari was built was Raja Kirti Chandra Bahadur. Importantly, Nashipur was the only princely state ruled by an Agrawal at the time of independence. 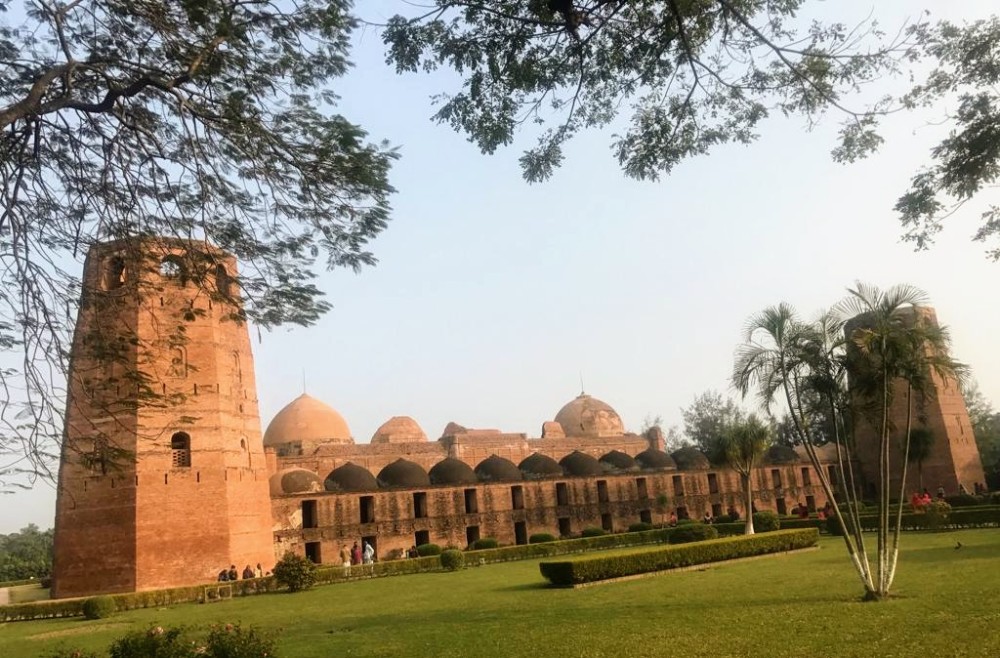 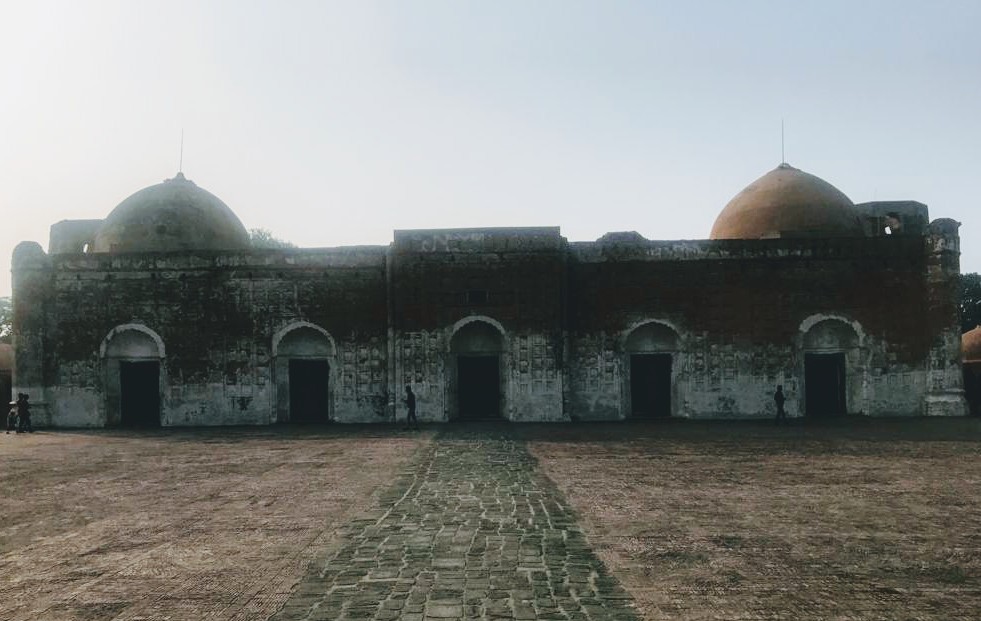 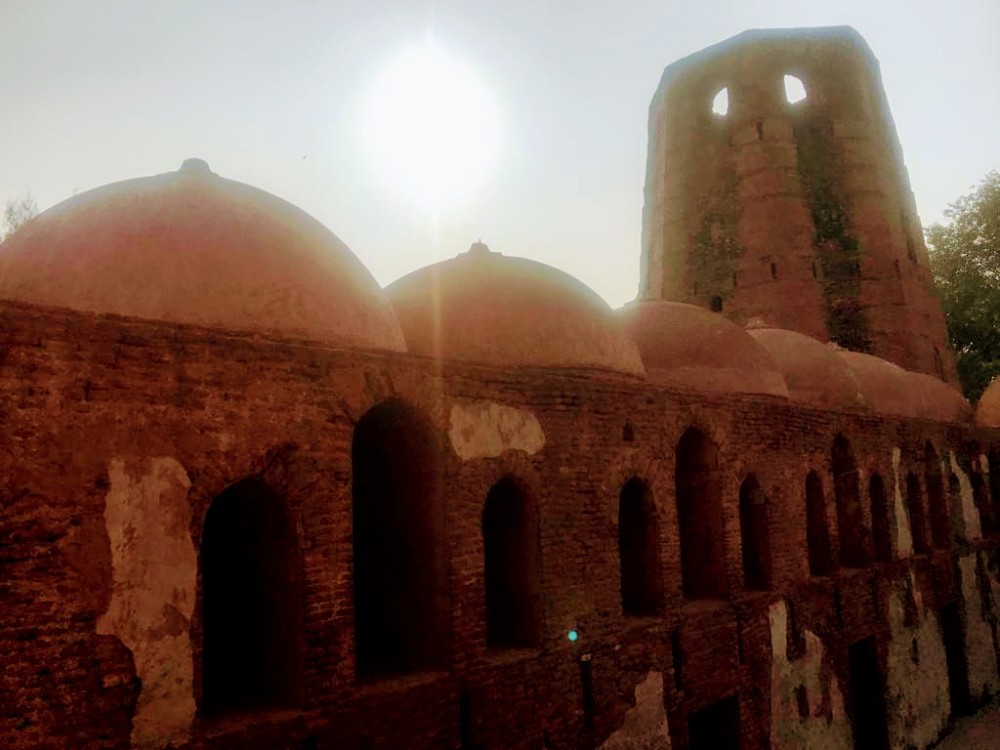 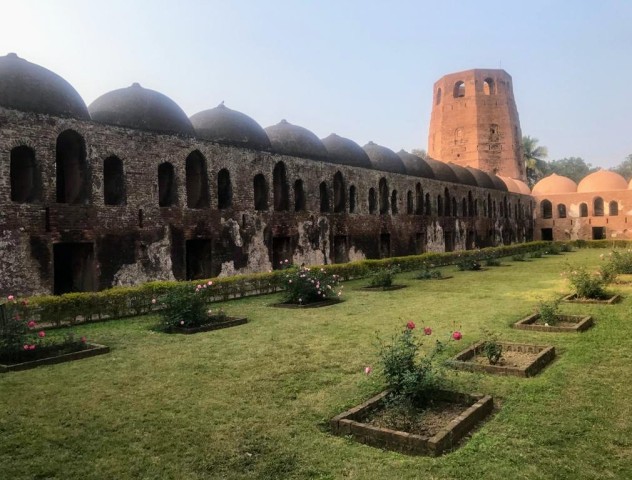 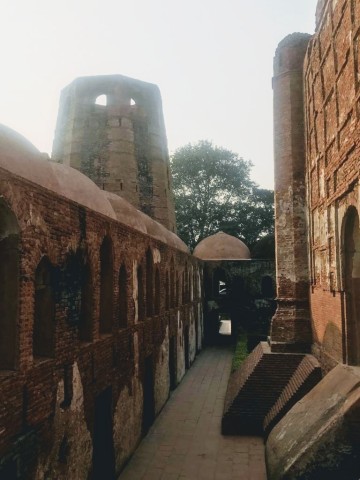 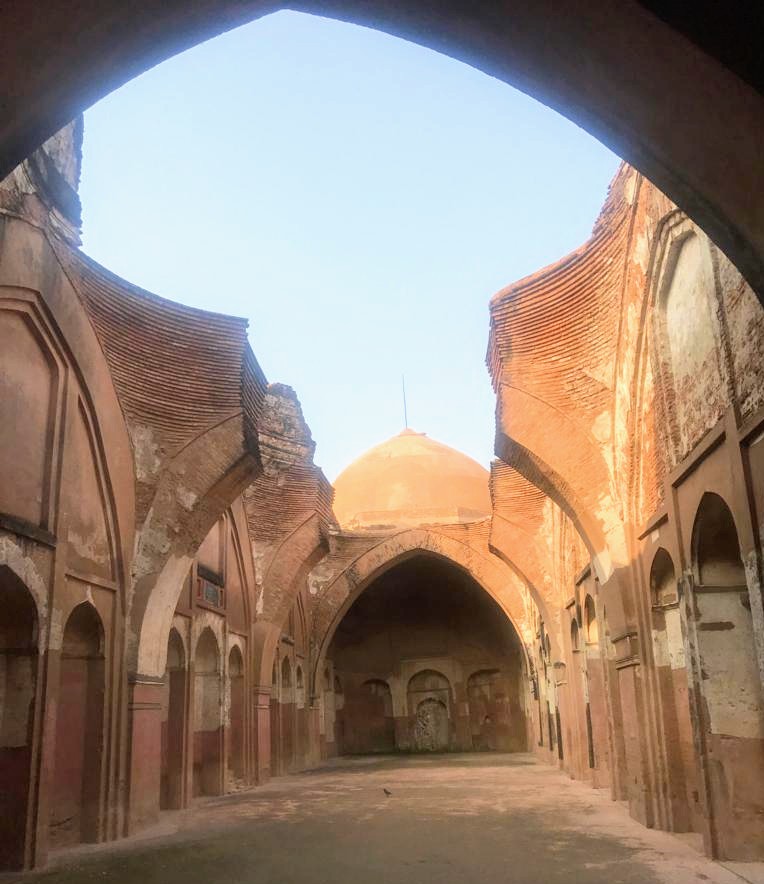 Katra Masjid is an imposing structure constructed by  Murshid Quli Khan in 1723. The Nawab was himself buried under the mosque.It was possible for 700 people to do namaz at a time. The mosque had a caravan serai and was also a place of learning.

Due to paucity of time, I could not visit Motijheel Amusement Park . I could also not devote much time to Kathgola premises which house a Jain temple,a menagerie and a large Bari (house).

There is also Jagat Seth’s bari which has been converted into a museum,but it was in a state of repair when I visted. 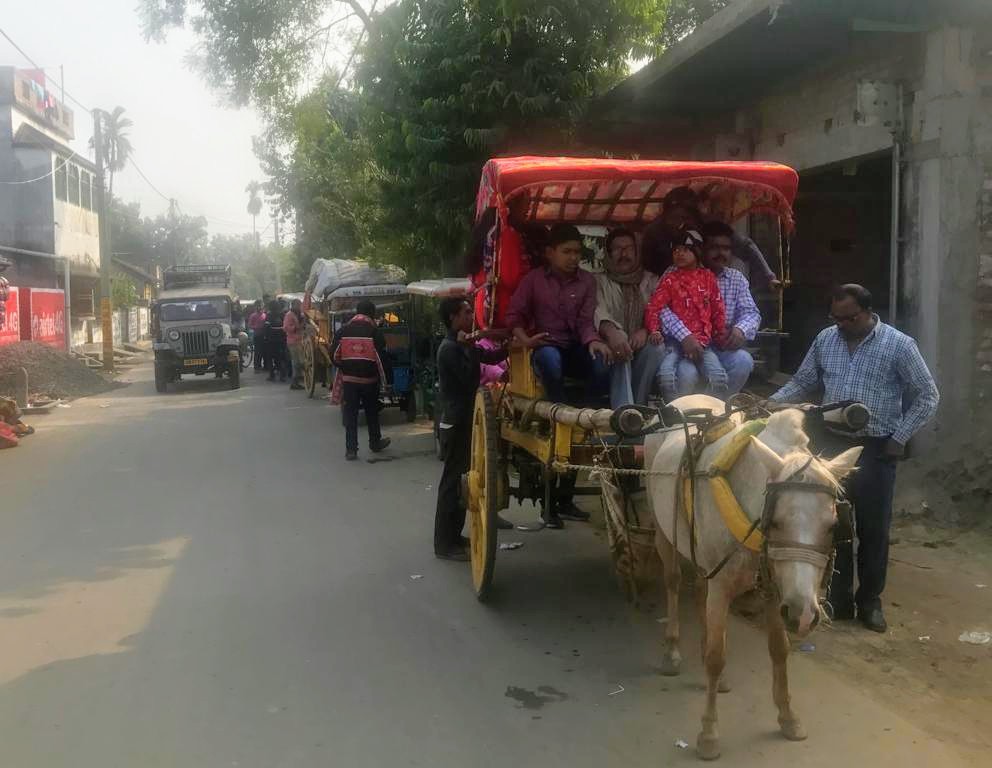 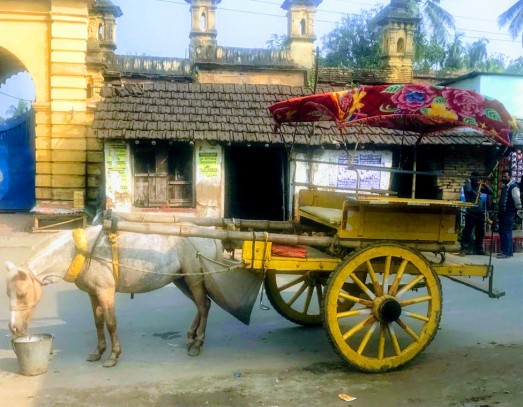 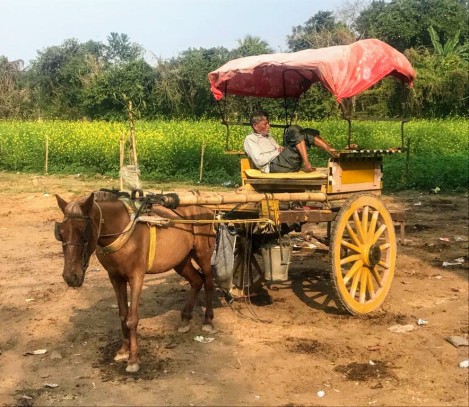 Mushid Quli Khan founded the town and shifted his capital from Dhaka  to Murshidabad in 1720s. The town had a mint and was his treasury,  and became a big financial centre by the middle of 18th century. It has also been a centre of music ,painting, fine arts , sericulture and ivory-works. The region is also known for its mangoes and litchis.

In its heyday , the population of the erstwhile capital was 7 lakh in 1750s, but it gradually lost importance after Siraj-ud-daula’s defeat at Plassey . Supreme Civil and Criminal Courts were shifted to Calcutta in 1772 .The population stood at just 15000 in 1901. As of today, 46000 people live in Murshidabad town. The headquarters of Murshidabad district are located at the nearby Baharampore Court.

The poverty of North Bengal is visible everywhere. Whoever I conversed with  in Murshidabad, whether a Hindu or a Muslim, started off with an assertion that 65-70 percentage of the total population of the district comprised of Muslims- it was almost as if this demographic fact was supposed to mean , explain and override  everything else.