The slogans of Azadi are back. Jinnah must be recounting his Fourteen Points again in his grave. Parliament recently enacted Citizenship (Amendment) Act to provide a path to Indian citizenship for those members of Hindu, Sikh, Jain, Buddhist, Parsee and Christian religious minorities who had fled prosecution in three neighbouring Islamic Republics ( Afghanistan, Pakistan and Bangladesh ) before December 2014. Muslims from these three countries have been excluded , since logically speaking they cannot be facing religious persecution in Islamic republics. Muslim masses , backed and perhaps even misguided , by leftists and liberals are out on streets and in parks , protesting violently and non-violently against this legislation, calling it dictatorial, discriminatory, undemocratic and unconstitutional. They are not ready to wait for even judicial review. It is almost as if the community feels entitled to exercise some kind of a COMMUNAL VETO.

Although Separate Electorates were introduced by Morley-Minto Reforms in 1909, and Gandhi’s support for Khilafat Movement in 1919 conceded that Indian Muslims might have supra-national concerns and loyalties, it was with the enunciation of Jinnah’s FOURTEEN Points in 1929  that further Indian national progress, both social and political, became hostage to the wishes of the  Muslim community.

Jinnah’s Fourteen Points were a reaction to Motilal Nehru’s maximalist positions ,as laid out in the Nehru Report (1928) . Jinnah asked for continuation of SEPARATE ELECTORATES, reservation of 1/3rd seats for Muslims in the Central Legislature as well as Central and state ministries , and reservations in jobs and local self-government institutions.

He proposed a loose federation with a weak centre ,with autonomy and residuary powers vested in states. Any constitutional amendment should have the consent of atleast half the states, along with the Central legislature to pass muster. No territorial alterations could be effected to the detriment of the interests of Muslim populations. No bill or resolution could be passed in any elected body if 3/4th members of that community vote against it. Muslims were to enjoy complete liberty in religious, social ,educational and cultural matters.

Jinnah basically craved to possess Muslim Veto over India’s destiny . This Muslim Manifesto emanated from the ‘ruling race complex’ and the fear of majority rule in any future democratic set-up. The Nehrus condemned these ‘ridiculous fourteen points’. The country was soon to be swept in the euphoria around Civil Disobedience Movement, launched in 1930. 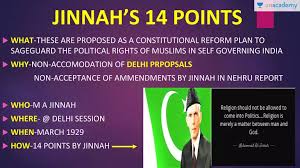 In the Provincial Elections of 1937, Muslim League fared rather poorly, even in the reserved Muslim seats (winning just 109/482 Muslim seats).Hindus voted overwhelmingly for the Congress, but the party could win only 26 out of the 58 Muslim seats it contested. Regional Muslim parties outsmarted the League in Bengal,Punjab, Sindh, NWFP, Baluchistan and even in Hindu majority states. Jinnah understood that there was a Muslim vote-bank which won’t opt for the Congress, and yet would not prefer the League unless it further radicalised its agenda .

The Pakistan Resolution followed on March 23rd, 1940.The League established itself as the sole representative of Muslims during the war years as Cripps Mission and CR Formula legitimised its demands. Congress leaders ,meanwhile, dug their heads in sands and kept claiming, rather ludicrously, that they represented Hindus, Sikhs as well as Muslims of the country.

The Partition of India then became a blatantly communal exercise, hurriedly pushed and inefficiently implemented by inept men-in-charge.  The Muslim League, bolstered by a staggering 87 percentage of Muslim  support  in the Provincial Elections of 1946,held a virtual veto over transfer of power and eventual independence of India. Neither the Cabinet Mission , nor the Mountbatten Plan could ignore the reality of Pakistan . Nothing less than a Muslim homeland in the North –east and north-west would satisfy them , and this demand was made non-negotiable.

Constitutional guarantees and communal veto were sought for the minorities in independent India . The former were enshrined in rump India’s constitution, in which secularism was implicit, but not explicitly mentioned(till 1976). The latter, demanded via Separate Electorates  and reservation in Assemblies/Parliament, jobs and local self-government institutions , was expressly denied. The further progress of the Sovereign Democratic Republic of India was not to remain hostage to the whims and fancies of any one community. The decision, and the intention behind it, of the Constituent Assembly was quite clear- the communal veto had already been exercised once to divide the country, but the future would be decided as per one-person-one-vote principle. No more concessions were granted to Jinnah’s Fourteen Points. Jinnah had sought and got his promised land , and with him should have gone away all vehemence, insecurities  and insistence.

But Gandhi remained in India. So did Nehru. And with them remained their vanity , delusions and wishful thinking that they enjoyed trust and support of Indian Muslims. Of course, they understood the political dynamics of the subcontinent and the communal undercurrent flowing since 1937 ,and yet they made some major mistakes even a decade later , and despite conceding the division on religious lines .

Given the prevailing situation , it should have been made clear that-

1.) Since Muslims of NW & NE had already won their ‘Homeland’ or ‘Promised Land’ , they would not be welcomed in  India after independence, but since Indian Muslims had chosen to vote for Pakistan (1946), but had been forced to stay out of expediency ,were free to emigrate to Pakistan whenever they wished ,till eternity, and

2.) The Right to Return of adherents of all Indic religions (Hindus, Buddhists, Jains and Sikhs), atleast of those who found themselves in East and West Pakistan, should have been enshrined in the Constitution. Afterall, they never expected the Congress to accept Partition on communal lines, and it were not possible for everyone to wind up everything and leave their homes behind at a short notice. Moreover, Jinnah’s August 11,1947 speech  , in which he declared that Pakistan would be a secular state and protect its minorities, further beguiled them into staying. The Objective resolution of Pakistan’s Constitution of 1949 also promised the same. It was only in 1956 that Islamic Republic of Pakistan came into being.

Anyway, India chose Parliamentary system of governance, in which indirect elections were to be held for the Lower House as per the First-Past-the-Post system. India was to be a Union of States, and not a loose federation as dreamt of by Jinnah. Both these facets of our system have been lampooned by left-liberals in the past six years. More than 60 percent of voters have not voted for the NaMo dispensation, they argue. State Assemblies with Opposition majorities are passing resolutions against a central legislation. And then they hide behind the Constitution , and yet they are honourable men, and the legitimately elected ones are Nazis ! The Congress and NCP have gone to the extent of saying that they sought NOC from main Muslim groups , before allying with the Shiv Sena, signifying their belief in the existence of Muslim veto.

Post –independence , Nehru gave the impression of being embarrassed by the ‘Hinduness’ of the moth-eaten, truncated India. The restoration of Somnath Temple (a symbol of Hindu decadence) between 1947-51 irked  Nehru no end. He confronted  Patel , ridiculed K.M. Munshi and fought a letter war with Rajendra Prasad on this point.  He wanted KKK Nayar, DM of Ayodhya, to ‘undo the wrong’ i.e. remove the idols that had mysteriously appeared inside the Disputed Structure in December 1949, but of course, Nayar and GB Pant did not abide. Nehru and Ambedkar rightly pushed Hindu Code Bill and Dowry Laws, but did not dare to meddle with discriminatory Muslim Personal Laws.  Uniform Civil Code has remained a pipedream ever since, subject to Muslim acceptance if it is to move ahead.

Patel had to virtually overrule Nehru’s objections on the Hyderabad Police Action in September 1948. Nehru advocated caution, even as Razakars indulged in massacre of Hindus. Partition created problems of law and order , as well as of resettlement of refugees . Nehru and Patel had serious differences of opinions on the issue of minorities left behind in Pakistan, on communal violence in Delhi violence and regarding banning  the RSS.

Nehru-Liaquat Pact of 1950 did provide some relief, but its implementation was sloppy . The Indian government just washed their hands off the Hindus and Sikhs left behind, citing Pakistan’s internal matter, and never really turned this into a priority issue in the 1950s.

India recognised Israel in 1950 but did not open an embassy till 1992 despite shared strategic interests and security threats. No government could afford to antagonise Indian Muslims by indulging the Jewish State of Israel. Domestic politics held a virtual veto over diplomacy.

Rajiv Gandhi bowed before this Communal Veto and denied Shah Bano the relief that Supreme Court had provided her. The Ram Janmbhumi case dragged on in courts for about 30 years because of fear of offending one community. TADA was reviled, POTA was repealed as a measure of appeasement. Manmohan Singh openly declared that minorities had first claim on the resources of the country. Despite a provocation as big as  26/11,India chose to indulge in dossier-diplomacy, rather than conducting surgical strikes against terrorists hiding in Pakistan. General Elections were just five months away , and the ruling party didn’t want to antagonise Muslims. UPA-2 promptly gifted the Sharm-el-Sheikh blooper to Pakistan ,perhaps as a return gift for Mumbai Attacks.

Given their lack of majority in the Rajya Sabha, NaMo-I could not make much legislative headway. But NaMo-II has finally broken through the deadlock and taken key decisions on Article 370 and passed the Triple Talaq and Citizenship Amendment Acts. The Apex Court’s  Ram Janmbhumi verdict has also been delivered. All India NRC, Uniform Civil Code, Population Control Bill and Anti-conversion law might be on the anvil. The perceived Veto has been flushed down the drain of time. This has ruffled feathers in predictable quarters.

Lest there be any doubt , the Fundamental Rights provide enough guarantees under Article 14,15,19,25 and 26 to not just minorities, but everyone. Article 29 and 30 , infact, make positive discrimination in favour of minorities. But the Constituent Assembly rejected the ideas of Separate Electorates, Communal Veto and  Reservation for Muslims in legislatures, jobs and educational institutions.

Muslims who remained in India , either by choice or compulsion , did so as minorities in a secular democratic framework. They chose to exist in a first-past-the-post system of election system having Parliamentary form of government . Now they must uphold the values enshrined in the Constitution of India, and proudly declare that they are Indians First, and then Muslims.