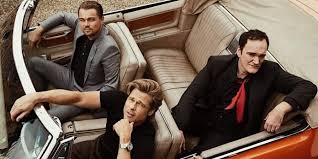 Brad Pitt’s Pit Bull has a larger , meatier role than the Great Al Pacino in Once Upon A Time in Hollywood. It is the dog, Brandy, that breaks the tense standoff at the climax by jumping the wannabe-assassin hippie when his master Pitt so directs him on the direction of Tarantino .

Talking about the climax which carries forward the idea of using alternate endings as a sort of historical catharsis, Tarantino unleashes the Pit Bull, Pitt and the Flame-thrower ( last used in Inglourious Basterds) upon three gun-toting, knife-wielding hippies of the Manson family. In Basterds, Quentin had bombed and flamed off Hitler, Goebbles, and most of the Nazi top brass ;  in Hollywood, he has mercilessly smashed, pulped, gassed and smoked the killers of Sharon Tate. 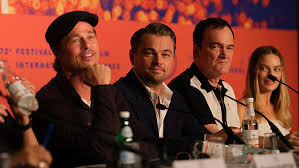 Tate was eight months pregnant by her husband, Roman Polanski, when she and her three house guests were brutally murdered in 1969 in their Hollywood mansion. Polanski is not prominently featured  in the film, but his unborn child, his wife and Rosemary’s Baby are paid rich tributes. Margot Robbie just shines through her performance and but for Brad Pitt, is the most beautiful actor in the picture. That builds the case for subjecting Brad to some kind of impeachment , or tax-evasion, or divorce proceedings , or a loving tribute from Tarantino or Polanski in the future.

In some ways , Once Upon a Time…. is Tarantino’s fan mail to that ‘Polish prick’. But it is first and foremost a buddy film, set in the studios of Hollywood of 60s. Struggling to survive change and age are an over-the-hill actor, Rick Dalton (played by Leo DiCaprio), and his stunt double, Cliff Booth (played by Brad Pitt). Dalton tasted stardom in the 1950s with a TV series, Bounty Law, but had since hit the ceiling. He was gradually getting sidelined , and he didn’t actually require a fawning Al  Pacino, a casting director for Italian Spaghetti Westerns, to bark this into his head. Rick also struggled with alcoholism, which had resulted in many traffic violations, and hence relied upon his buddy , Cliff Booth, to chauffeur him around. 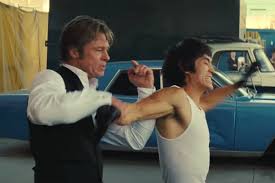 Cliff Booth (Pitt) is presented as something of a minor legend in the classic anti-hero mould. There were whispers in Hollywood that he had bumped off his wife but had managed to get away with murder. That kept him mostly benched and hence dependent upon Rick. In a snippet from the sets of The Green Hornet (TV series), Bruce Lee is shown boasting about how he could have stopped Mohammad Ali . Booth challenges the boastful loudmouth , and hurls him over a car. In a tense scene later in the film, Booth enters the Manson stronghold to check upon his friend, the owner of the ranch, and doesn’t cave in face of hostile reactions from the hippies. He is cool enough to go shirtless, climb roofs, fix Rick’s TV antenna, indulge his own dog and refuse a blow-job simply because the hippie lass offering it has no proof of her age.

DiCaprio and Pitt romancing each other despite being the star and his factotum is a sight for sore eyes. The realisation that his best might have passed is unnerving,  and Rick Dalton is ever a moment away from breaking into tears. He is even patronised on the sets by a child actor (not actress, which as she insists is a stupid word),but then gathers his wits , improves his act and manages to  earn her appreciation. There might still be something left to salvage. Leonardo has bared his soul for Quentin, and the result is a work of beauty.

Quentin Tarantino has mocked the worldview of hippies, who set out on the course of violence after a dopey conversation in which they blame Hollywood for teaching the virtues of violence to the world. He shows them as parasitical, diabolical and above all, dumb, which might not be too far from the truth. Once Upon a Time in Hollywood is certainly not among Tarantino’s best, and definitely not a quintessential Tarantino film, but has enough in it to make it a compulsive watch.