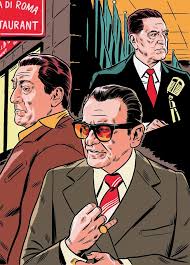 “When I was a young man I thought house painters painted houses. What did I know ? I was a working guy. A business agent for teamster local  107 out of south Philly .One of a thousand working stiffs. Until I wasn’t no more. And then, I started painting houses myself.”

A grand old man ensconced in a wheelchair in a nondescript nursing home  prepares for his eventual death , even as he recounts his experiences in the World War II,as a Teamster and a Union leader , a mafia hit-man and his long association with the mob as well as with Jimmy Hoffa. Frank Sheeran , played by Robert de Niro, might have lost all his friends to prison and death ,and relatives to apathy ,but remained completely devoid of any guilt for his actions. 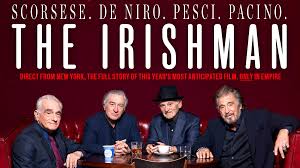 “I heard you paint houses? ,” Hoffa  asked Sheeran the first time they talked over phone.

By which he meant that he killed and disposed of the bodies as well. He was not being humourous, rather stating plain facts.

Solid, reliable, bereft of irony, distant from humour and destitute of even a ray of human emotion – is this the darkest character that Bobby has  played on screen ? Even his daughters were scared and disgusted of Frank and his work. He was close only to Russ ,and Jimmy, who both adored and respected him. How Frank actually felt about them is difficult to tell, given that he was a black-hole from which nothing escaped.

Watching an aged Bobby buying his own coffin and humouring a chaplain (less because he has any need to confess but more out of necessity to kill time) serves a chilling reminder that a long life is a great leveller, and death a lonesome  persuit.As Frank recalls a fateful road trip which he and Russ (Russell  Bufalino, played by Joe Pesci) took with their wives in 1975, the audiences  stumble upon the end of the great Jimmy Hoffa. This narrative is interspersed with flashes from 1940s,50s and 60s, as Frank, Russ ,Jimmy and America tumble into 1975. 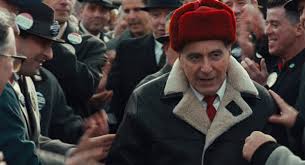 “Nowadays , young people don’t have a clue who Jimmy Hoffa was. In the 50s, he was as big as Elvis. In the 60s, he was like Beatles. Next to the President, he was the most powerful man in the country, bar none.” Hoffa was the President of International Brotherhood of Teamsters between 1957and 1971. He strode like a Colossus , was targeted by Bobby Kennedy over allegations of financial fraud in  pension fund, and later fell out of favour with the mob because of his incessant ,loose chatter. Al Pacino is in such stupendous form that an Oscar nomination must be considered a done deal. (I don’t see how Bobby and Joe Pesci can be denied nominations either)

When he thunders,“If you got it, a truck brought it to you,” my fanboy heart shouts Hoo-ah.  “Big business and government are trying to tear the union apart. They are trying to sow the seeds of dissent, at a time when teamsters need unity. Solidarity, I want to write it in the sky- solidarity,solidarity,solidarity.”  I have seen Jack Nicholson play Hoffa in a 1992 film, but it was a subdued performance. But Al Pacino has delivered a knock-out punch.

That Jimmy loved to talk was pointed out by Russ to Frank after their introductory phone call  itself. “Yes, I thought I was talking to General  Patton”. Bluster contained seeds of his  destruction , but Jimmy loved his own voice too much to bother about consequences.

“I try to keep him calm, even told him this is what it is (that he has to retire), but the knucklehead just doesn’t seem to understand.” There was a sort of inevitability to Hoffa’s downfall. Russ tried to find some elbow room, but failed. “Its my fucking Union”, Hoffa shouted back when Russ pointed at the writing on the wall . “Nobody threatens Hoffa”, overestimating his own hand. Even Frank became gradually resigned to the eventuality after trying and failing repeatedly . “If they can whack the President, they can whack the President of the Union,”  Russ had clearly told Frank as much.  Sheeran tried to warn him one last time at his testimonial dinner but Hoffa was beyond reason. “They wouldn’t dare”. No insurance works against the mob .Frank understood that, Hoffa did not.Could not.

It is admirable how Russ (Joe) handles Frank(Bobby) throughout the film – he is warm ,tender and big brotherly ,yet unbendingly firm, and expects to be obeyed unquestioningly. “All roads led back to Russ. When he asked you to take care of something, you were supposed to do it yourself. He didn’t want two roads coming back at him.” Joe Pesci’s minimalistic, no-fuss Russ is a class act.

It almost seems as if Martin Scorsese has played an elegy ,not just for himself and the greatest actors of his generation , but also in the honour of gangster films.  Goodfellas (1990) was unabashed celebration of the gangster life-a fruition of childhood aspirations, and a desire to ‘belong’ to some fraternity .Casino (1995) was far flashier ,and more brutal. The Irishman  is a tribute to the era gone by, a veritable epic documenting the rise and fall of unions, mafia and Presidents , and a meditation upon the hollowness of life.

The contrast with Goodfellas is obvious from the tone adopted during introduction of characters. While every mafia hood , his nickname and his quirks were introduced in Goodfellas by a young Ray Liotta , the Irishman prefers to divulge the date and manner of the death of every mobster as a part of introductions .

But there is a fair bit of nostalgia as well. A car rolling around a laundry in slo-mo,with Bobby at the wheels, brings the Taxi Driver alive. Bobby pulping a bakery owner using his shoes as if there is no tomorrow makes one fondly recall the Billy Batts lynching in Goodfellas.

Bobby pays tribute to the mafia genre by dwelling upon his art of painting houses , choosing weapons for specific jobs,disposing of guns once the deed is done and  elaborating upon reasons for using bathroom prior to a major hit.

But Scorsese makes it amply clear that The Irishman is more than just a gangster film, and must be construed as his confessional or the distillate of all his work.Crime might pay bills and support lavish lifestyles, but doesn’t end one’s loneliness. One might ‘belong’, but there is no guarantee that you would serve or die  along with your pals. The wait for the copper and the undertaker is a lonesome activity. Summons might yet come in tandem, bells usually ring for individuals and not brotherhoods. 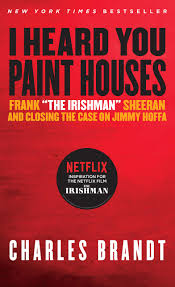 Bobby read Charles Brandt’s I Heard You Paint Houses, and prevailed upon Marty to make a film on it who agreed on the condition that Joe Pesci and AL Pacino also act in the film. Joe is said to have refused fifty times , but finally gave in to Bobby’s ‘this is what it is’ logic. But it is Al, fucking Al who is the X-factor in this film.

The mob played a key role in ensuring that JFK enter the White House. Joe Kennedy had run bootlegging rackets with them in the 1930s. Sam ‘Momo” Giancana and JFK even shared a girlfriend. The Italians voted overwhelmingly to send an Irishman in the White House. The film (through Russ) all but admits that it was the mob who got the President  killed over unfulfilled promises in Cuba. “Bobby Kennedy is now just another lawyer”, screamed Hoffa after JFK’s assassination. Jimmy and  Frank were in an ice-cream parlour when the news flashed on TV. They don’t utter a word, but Al Pacino, de Niro and Ray Romano have dished out a scene , an acting masterclass for the ages. Afterwards, Jimmy (Al) goes cocky by telling reporters that he won’t attend as he had not been invited for the funeral and raising the flag at the union flying at half-mast to its full. Jimmy was relieved , and did not hide his feelings.

Ray Romano and  Bobby Cannavale have given sincere performances. Harvey Keitel has a brief role but lends finality to the elegy. Screenplay has been beautifully penned by Stevan Zaillian. Thelma Schoonmaker , the ever reliable editor, is in top form. The film’s runtime is 209 minutes. Could it have been trimmed a bit ? But why would you lessen the screentime when such an illustrious cast is offering you its very best?

Many long conversations between various top actors are gold-dust. Camera just rolls on and they keep conversing, with due indulgence from the director. There is a lot of warmth in the scene where Pacino asks Bobby to contest Union elections and the latter agrees, and later when Al speaks at the Frank Sheeran testimonial. Joe and Bobby have an understanding developed over years of collaborations.  Joe , Bobby and Keitel share screenspace  . Al walks up to Keitel and offers a handshake. Joe and AL have a tense final conversation at the testimonial. Joe sends off Bobby at the tarmac when he flies to pack Al off, and is still waiting whenhe comes back after doing the job. Al and Bobby share the backseat of a car as Bobby knows they are headed towards the final destination.. It is impossible to remain detached and appreciate all this purely on artistic merit .Scenes flow like gentle stream, there are no tempestuous waters ,no roaring rivers or storming seas in the Irishman.

The three actors have been de-aged using special effects. It was quite a risk, but ultimately pays off , possibly because it is through their eyes and bodies that they converse, and not their burnt,sagging skin. A discerning audience understands that the three actors are well into their 70s, and can overlook certain liberties taken by those best in the business.

PS- I have used AL, Bobby, Joe for Jimmy Hoffa, Frank Sheeran and Russ interchangeably to keep it brief.