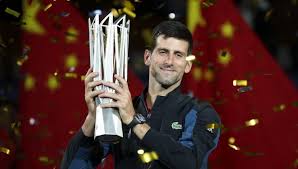 These days, Daniil Medvedev reaches the final of every tournament that he participates in .He might falter at the final hurdle, like he did at the US Open and the Canadian Open against Nadal  or at the Washington Open against Kyrgios, but that’s a different story. Sometimes he goes all the way, like he did at Cincinnati before the US Open and St. Petersburg after it. Five finals in his last five tournaments is an incredible enough run for his final appearance to be considered a universal rule. 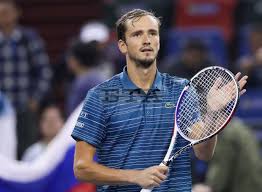 It is just that the potential semi-final of the current tournament that he is playing in ,ie the Shanghai Masters,  might pit Medvedev against  ex-Champion and World Number One, Novak Djokovic. The Serb lost to the Russian in the semi-final at the Cincinnati Masters in August, and in quarter-final at Monte Carlo in May. The No.1 had prevailed over Daniil at the Australian Open in a very tightly contested Round of 16 match .Novak might lead the head-to-head by 3/2, but on form, it is Medvedev who should be considered the favourite.

Djokovic might have won four times at Shanghai, but has not been in the best of form since winning the Wimbledon in July. After Cincinnati loss, he struggled badly with a shoulder injury at the US Open where he  bowed out mid-match against Stan Wawrinka in the fourth round. Even at Cincinnati, there were rumours ,which he later denied, that his wrist was not in the best of condition. Last week, he did overcome Pouille, Goffin and Millman in the last three matches to win his first Tokyo Open 500. It looks like the shoulder inflammation is now healed, and Novak is keen to extend his 271 week stay at No.1 position till the year end.

But a lot of water is yet to flow before that happens. Rafa still leads the Year End Top Ranking Race by 1460 points, but he is carrying a wrist injury himself. Novak has to defend 1000 points at Shanghai, 600 at Paris and 1000 at ATP Finals. If Rafa returns after Shanghai , this would be tall order. 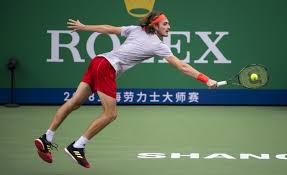 While Medvedev will have to overcome the winner of Khachanov and Fognini  in the quarter-final, Djokovic faces a tough test in World No. 7, Stefanos Tsitsipas. The two have played each other twice, with Tsitsipas prevailing in last year’s Canadian Open, and Nole avenging that defeat in this year’s Madrid Masters final.

Tsitsipas began the year as the hottest new kid on the block. He set the Australian Open on fire by defeating Roger Federer in the fourth round before eventually losing to Nadal in the semis. In the French Open , Stefanos lost a memorable five setter to Wawrinka in the fourth round, In between, he lost the final at Dubai to Federer and at Madrid to Novak, and the semi-final at Rome to Rafa. He also managed to win two 250 points tournaments in between the two Slams- Open 13   and Estoril . After the French Open defeat, his performances tanked. He lost 5 of the next 6 matches, including first round losses at both the Wimbledon and the US Open. In between, he also managed to befriend Nick Kyrgios, and spent quite some time,energy and focus playing Doubles with him. The Stefanos Tsitsipas juggernaut seemed to have been derailed until last week ,when he roared back to form by reaching the final of Beijing Open by beating Lajovic, Basilashvili, Isner and Zverev, before losing a hard fought final to Thiem. Now Tsitsipas looks in good touch , but he has to overcome Felix Auger Aliassime (who has beaten him twice in two meetings) and then the winner of Hurkacz and Monsfils ,before he takes on Novak.

Djokovic’s path is not that easy. He faces Shapovlov in Round 2 and then the winner of Pouille and Isner in Round 3. Novak Vs Tsitsipas in the round of 8 and Novak/Tsitsipas Vs Medvedev in the round of 4 are mouth-watering prospects. Novak might still get to play Federer in the final at Shanghai or later this year at Paris and WTF. Nadal Vs Djokovic is not ruled out either in the next two months. But the most awaited battle between Nole and Nick Kyrgios shall not perhaps   happen this year, with the latter sitting out of the circuit with injury.

While Nole might still recover from a loss against Stefanos, a third straight defeat against Daniil Medvedev might dent his confidence irreparably, and clear the way for Medvedev’s future greatness. An early loss at Shanghai might also damage Novak’s chances of retaining the top world ranking.