That Jinnah was dying, Jawaharlal must have known. Dickie was his dear friend , whom he forced upon India, even as  Jinnah rudely ruled out the former’s wish to become the  First Governor-general of Independent Pakistan as well. With Jinnah gone in September 1948 , India might have bargained better in Punjab and Bengal, and intervened effectively in Baluchistan, Kashmir and North-West Frontier Province. But the call of the Chair knows no waiting. A weary Empire and a hasty Grand Old Party made a hash of matters at hand. Prime Minister Atlee , on February 20th,1947, had announced that the British would leave India by June 30th,1948. But Mountbatten Plan of June 3rd  vilely pre-poned that  date to August 15th , 1947 to coincide with the moment of his greatest triumph – the Japanese surrender in Burma in 1945.

Mountbatten was not just inept, but possessed slyness befitting a distant royal cousin. Nehru was starry-eyed and salivated for Western recognition . Oh how the pettiness of his own partymen embarrassed him ! How cruelly were his vanity ,weakness and romanticism exploited by Edwina and Dickie, as well as Jinnah. How and why did Patel and the conservative wing of the Congress let this happen ? (This RW betrayal must also be properly studied)

Why did India let Mountbatten stay on in the first place ? It is mentioned that he was just a figurehead, but then he did exert crucial , pernicious influence in many of the key decisions taken by Government of India  . His attitude towards the Kashmir problem was very questionable from mid-1946 onwards.His interest was in  keeping Pakistan in good humour as  UK was fearful of losing access to Central Asia and Arabian Sea, and rising Russian interference in the region . Not only did Mountbatten give  vague signals to the Maharaja of Kashmir in hope that he would eventually accede to Pakistan , but also made it difficult for India to send troops into the Valley until Hari Singh had signed the Instrument of Accession. Nehru’s insistence on plebiscite in Kashmir ,both before and after the Accesion ,and his later decision to approach the UN were  influenced by Mountbatten. India could very well have conquered Kashmir before October 1947, or taken back the whole of POK after the invasion and no one would have batted an eyelid.

Indira Gandhi could have solved Kashmir problem in 1972, but the misplaced desire to see a stable, democratic and friendly Pakistan saw India fritter away its advantage.

Frontier Gandhi Khan Abdul Gaffar Khan and his Khudai Khidmatgars were set against partition. But quite arrogantly, Congress did not even bother to consult him before accepting the plan, and in Khan’s own memorable words ‘threw him to the wolves’. Khan and his elder brother Dr Khan Abdul Jabbar Khan boycotted the NWFP referendum of 1947 as it did not provide for the option of Pashtun independence or merger with Afghanistan . What could have been used to  pressurise Pakistan at its birth was rather tamely  gifted to them by betraying our dear friend, well-wisher and a great man of peace. 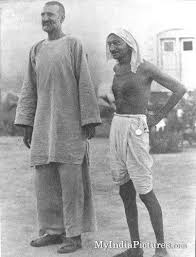 This was an organisation of nationalist Muslim parties formed in 1929 . But Congress never engaged them constructively and virtually allowed the British to anoint Muslim League as the sole representative of Muslims. This failure may be ascribed to the fact that Gandhi, Nehru and Patel vainly considered themselves as secular representatives of all Hindus and Muslims in this country. This was an untenable position. The main constituents of AIAMC were – Khudai Khidmatgar, Krishak Praja Party of Fazlul Huq of Bengal, Sind Ittehad Party, Anjuman-e-Watan Baluchistan, All India Shia Political Conference, Jamait Ulema-e-Hind and others. These parties were by no means ciphers. Khidmatgars were lead by Frontier Gandhi and DR Khan Sahib. Fazlul Huq of KPP was a popular leader of Bengal and  even led a coalition comprising Shyamaprasad Mukherjee’s Hindu Mahasabha and Forward Block. Jinnah never trusted his stance on partition. AeWB was led by Abdul Samad Khan Achakzai who kept in touch with Maulana Abul Kalam Azad , but didn’t receive even a shred of support from Congress. Even the Unionist Party of Sikandar Hyat Khan (CM Punjab 1937-42) was always undermined by the Congress in favour of  Muslim League.

That brings us to the question of Balochistan. The Khan of Kalat desired independence. Kalat formed a major part of Baloch region . Las Bela, Kharan and Makran had acceded but Kalat stood firm. Then a mysterious All India Radio broadcast in March 1948 acted as the last straw for the Paksitan army to occupy Kalat and force its merger. The Broadcast referred to a press conference by V.P.Menon  (Patel’s Man Friday) in which the bureaucrat claimed that the Khan was pressing India to accept Kalat’s accession, but that India would have nothing to do with it.Sardar Patel refuted the claim the very next day, but the damage was done.

Since March 1948 , Balochistan has seen five waves of insurgency, the fifth one currently in progress. PM Modi extended thanks and lent moral support to the Balochis in his Independence Day Speech in 2016. All India Radio has made available their short wave radio service ,running since 1974, through a website and mobile app as well. Free Baloch movement has gained in strength. It is not shocking that Manmohan Singh allowed Balochistan’s reference in the Sharm-el-Sheikh Joint Statement of 2009. His party has always considered such tricky questions as ‘historical incoveniences’ in path of their grand secular project. When have they given up on any chance of moral grandstanding ?

Thankfully Patel was around till 1950 to decisively incorporate Hyderabad and Junagarh. After him, it took India four more years to get Pondicherry back from France(1954). It took Nehru 14 long years to liberate Goa. The Portuguese refused to back down even in face of Western persuasion. They joined NATO in 1954 , and a confused India with all its bombast of Afro-Asian solidarity found itself cornered. Nehru was forced to ban non-Goan Satyagrahis from entering Goa in 1954, and also issue issue travel and visa bans. India could not secure the release of Mohan Ranade , a Satyagrahi arrested in 1955, till 1969. It is quite pertinent to remember what John F.Kennedy said to  Indian Ambassador B.K.Nehru  in the aftermath of the Annexation-

“You spend the last fifteen years preaching morality to us, and then you go ahead and act the way any normal country would behave … People are saying, the preacher has been caught coming out of the brothel.”

It’s shocking how in 1950, Nehru was fixated with China’s intervention in Korea, rather than on Chinese annexation of Tibet. Fact be told, Nehru sent mixed signals on Tibet . He even wrote that China was going to annex Tibet, but sometimes spoke to the contrary.  He considered the colonial boundaries as final,  haughtily refused to enter into any kind of boundary negotiations with China, kept parroting Panchsheel and Hindi-Chini Bhai Bhai, and gave up on Tibet unilaterally without any kind of quid pro quo.

During all this time, India lobbied on behalf of Communist China in the UN. Jawaharlal’s  problem was that he saw himself as an ambassador of world peace. Two commies,VK Krishna Menon and K.M. Panikker went out of their way to influence his Tibet policy. He was suitably warned by Patel just before his death. There was a lot that could have been done in Tibet. India maintained an embassy in Lhasa which Nehru closed down as it was ‘imperial legacy’. Tibet had been independent since 1912. West looked India to take lead in calling Communist China’s bluff. China wanted negotiations . Nehru offered them his preachy Panchsheel nonsense.  The dragon then slapped us so hard , it still hurts.

India could atleast have traded Aksai Chin , where not a blade of grass grew, to gain concessions in Arunachal and access to Kailash. If we had to sell Tibet, we could have atleast earned China’s neutrality, if not friendship. But strategic mishandlings are all India has to show for in its first fifteen years on independence.