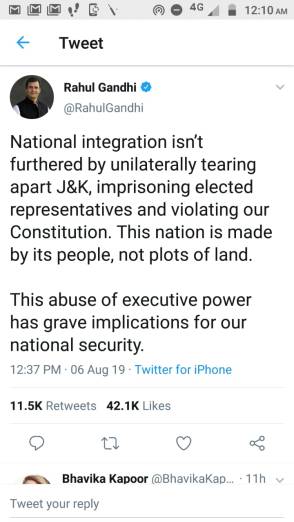 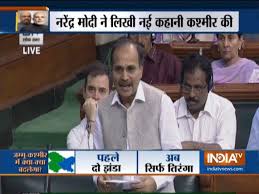 “National integration isn’t furthered by unilaterally tearing apart J&K, imprisoning elected representatives and violating our Constitution. This nation is made by its people, not plots of land. This abuse of executive power has grave implications for our national security.”

One can enjoy the anguish of bleeding hearts , perpetual whiners and Wahabi apologists. One can mock at compulsive contrarians and riled-up liberals. It is easy to commiserate with the pain of leftists and doomsayers. But how does one digest the above tweet by the tallest among the punies, the most mainstream of the putative Opposition, the has-been chief of the rump Grand Old Party?

The more I chewed on this tweet, the more I was filled with terror, nay disgust, at almost every word that had been typed.  Even for a party whose Lok Sabha leader committed  a self-goal today by screaming on the floor that Kashmir was an international issue , the tweet represented the nadir and left other leaders embarrassed.

It was in Parliament that Nehru trivialised the loss of  Aksai Chin by referring to it as a place where not even a blade of grass grew. This tweet refers to the territory of J-K,POK, Aksai Chin and Ladakh as ‘PLOTS OF LAND’. I can’t accuse Rahul of possessing Nehruvian turn of phrase . It is possible that Tharoor or Divya Spandana might have drafted this ! But he should have atleast seen it before sharing.

Perhaps Rahul would also care to explain if he thinks that India is just a NATION ? Or a state , or a country ?  Is he aware that Part I ( Article 1-4 ) of our Constitution pertains to the country that is India. How can he just disparage our matribhoomi by calling it  ‘plots of land’. What is this obsession with ‘nation’ ? Is he obsessed with millat ? One must remember that the motherland (country) has been here long before the modern nation came into being. The country predates and would outlast the nation, and sub-nations.

One must have exceptionally thick skin to accuse this government of IMPRISONING Kashmiri leaders and subverting democratic processes . Nehru’s dispensation kept Sheikh Abdullah imprisoned for 11 years (1953-64), Indira kept him interned between 1965-68 and then exiled him for 18 months in 1971.  In 1984, Indira-Rajiv combine encouraged Sheikh’s son-in-law G.M. Shah to rebel against Farooq ,whose government was unceremoniously dismissed while the latter was in London . In 1987, the Rajiv dispensation aided and abetted massive rigging in the Assembly polls to help  Farooq with whom rapprochment had been reached . With such a family track record , it is audacious of Rahul to protest against a day of detention for Abdullahs and Mufti. Separatists like Yasin Malik and Shabbir Shah are facing the brunt of law for their crimes. Surely a week or two of curfew , or S.144 wont destroy Kashmir. A responsible and sensitive government ought to take all precautions in face of credible threat perceptions. Heavens shall not fall if students don’t attend schools and colleges for a few days, and Amarnath Yatris are turned back.

States have been divided against their will, as recently as Andhra Pradesh in 2014. If the decision was so harmonious, why was the Congress wiped out in subsequent polls in the state? Did this action reflect the popular will of Andhraites ? Did it promote national INTEGRATION ?

I don’t quite get why he has accused the Centre of acting UNILATERALLY and ABUSING Executive power . Did he want a bilateral India-Pakistan consensus on the abolition of Special Status ? Is he peeved at exclusion of Hurriyat from the process ? Or is he disappointed that the  incrementally separatist NC and PDP were kept out of decision-making ? Aren’t their views on autonomy and militancy already well known ? Is not a majority government expected to take decisions ? Or does he want a National Government (all party coalition) to rule the country ? Does he really think that Indian Parliament is same as Indian Executive ? Why does he allege abuse of executive power ? Is he aware that the President of India is also a part of Indian Parliament ? The signing of the Constitutional Order and passing of the Acts are perfectly legal.

Have J & K been TORN apart ? Are not the two regions still bound together as a UT  ? Or does he still think that as per rumours J&K has been trifurcated ? I suppose he is angry that Ladakh has been made a UT . But has he forgotten that his great-grandfather had also acquiesced in the partitions of Bengal and Punjab , and Indira had torn Pakistan into two. Borders are not permanent. They just reflect the geopolitical situation of the time. What is the cause of grouse ?

Rahul must reflect if Constitution has been violated in the past two days. Can one really mock our legislative processes and hurt national interest with impunity ? Ambedkar, the father of the Constitution, had refused to accept Article 370. How does Congress reconcile these facts ?

Lastly he warns about grave implications for national security. As if Kashmir has been an abode of peace. As if Pakistan would let any chance to hurt India pass by . As if extreme Sunni Wahabism is a new threat. As if Islamic Jihad can be wished away .Or is this a call to fifth columnists and separatists to step up their opposition. I just hope he does not end up inciting and encourage jihadis to strike India with renewed vigour.

I wonder if it is just hate dripping out of this tweet, or it is sheer incompetence on his part ? IT might be an attack of envy , or a virulent expression of anti-India feelings. Silence would not have exposed him so completely.