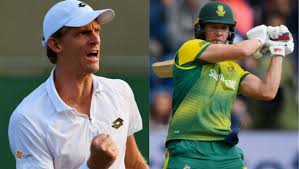 Sachin Tendulkar and Shane Warne have managed to stitch together a Tennis All-Stars’ Cricket XI ,that shall take on Cricket’s Best in a T20 match at the Lords’ on July 15th   . The finals of both the Cricket World Cup and the Wimbledon Championships are scheduled for  July 14th.

In a recurring dream of his , Sachin Tendulkar often watches Roger Federer bat on the Lords’ . The thing with world beaters is that they summon will and find ways to turn dreams into reality. Sachin pitched his idea of  Tennis All-Stars  to Roger Federer , who graciously agreed . Why decline and invite rude press anyway ? Sachin and Shane Warne had earlier organised retired players’ Cricket All-Stars in the USA. Now they have raised this rag-tag army to take on Cricket’s Best.

Shane Warne had initiated Novak Djokovic in the magical art of wrist spin. The venue was Rod Laver Arena, Rod Laver himself was in attendance and the event was the curtain-raiser for Australian Open . The Serb had then batted gingerly but had ripped the ball well, and got quite some drift. Nole found the idea irresistible, and has signed on to play . He keeps in touch with the sport through his British chauffeur who is a decent cricketer and who Nole once suggested to Travor Bayliss to try out in the English side .

Some years back, Roger had displayed his leaning forward defence during a Wimbledon match against Mannarino . That shot didn’t just floor Sachin, but led ICC to extend a nets’ invite to him . The two maestros have kept in touch for past many years and exchanged notes on cricket. Not long back, Virat Kohli also called on the GOAT. Roger supports South Africa, his mum’s country . A player with such immense control over his racket, superb hand-eye coordination and quick hand speed  is a natural batsman by disposition.

Novak has a very flexible body which can be hurled into the spinning action. He can also play a variety of unconventional shots and be an incredible asset in the field with his level of fitness . With such a strong double-handed backhand ,look out for switch-hits and reverse sweeps, even through covers or over mid-on !

Kevin Pietersen got a whiff from Shane, and suggested Dan Evans , World Number 61, and Kevin Anderson . A very drunk KP had snubbed a selfie-request by Evans during the Australian Open, 2017. Later they made up and KP became aware of Dan’s love for cricket. That Evans has served a ban for coke abuse and is back in the thick of things (lost in round 3 in a thriller at SW19’ 19) also made Warnie sit up and take notice.

Kevin Anderson  was once beaten in a tennis match by  AB deVillers . KP was aware of this, as well as Kev’s interest in cricket.  Surely the giant Saffer could hit a few out of the park like his friend Anthony Benjamin ! Kevin confirmed he could, as every South African can , and that sealed his place up the order.

It was Evans who recommended both Kyle Edmund (World Number 30) and Cameron Norrie (No.50). Both Britons were born in South Africa, where they picked up cricket as kids. Norrie even lived in Auckland (Nz) for quite some time where he honed his basics but then moved onto tennis . Kyle is a right-handed batsman with quite some batting talent . He has also kindly agreed to keep wickets.Norrie is a leftie who can push and prod,run some quick runs  and bowls handy left arm off spin.

SRT drafted in Rohan Bopanna and Leander Paes. Bops used to open for his school and bowl slow medium pace. Lee captained his school cricket team,punches the ball ferociously while batting and moves the way either way as a seam bowler . Both the Indians have displayed their batting abilities during Chennai and Pune ATP tournaments ample number of times. Someone as popular as him also seems like a natural choice as the captain of the side.

It was Bops who referred Aisam-ul-Haq Qureshi ,his former doubles partner . The Pakistani charges in to bowl his ins and off-cutters a la Shoaib Akthar, and is a handy bat lower down the order.

Rafael Nadal was seen wielding a willow during Chennai Open in 2009. He mistimed quite a few of his shots and seemed like a muck with the bat. Rafa doesn’t come from a country with a cricketing tradition, but somehow All-Stars looked incomplete without his presence. The perfect gentleman that Rafa is, he agreed on a special request from Roger . He can definitely run –in hard, roll his left arm over  and hurl some cannon balls at high pace. Never take an incoming tornado lightly – its beauty is second only to its power of destruction.

Ten spots were sealed by now, and Ozzie was signed. This was a serious lacuna. But Warnie was not too sure about Kyrgios or  Tomic ,the ‘tanker’. Warne had earlier him  written an open letter in 2015  asking him to not waste his talent and respect the sport.  He had also offered to fix his problems of outburst in 2017. Nick’s  recent body shots and underarm serves had rubbed Rafa the wrong way. In his recent podcast, he had mercilessly trolled both Nole and Nadal . But Nick does possess undeniable ability with his racket and balls . Recently ,in Wimbledon, he mimicked a left-handed forward defense shot which got noticed . Nick’s chutzpah and is irresistible . When contacted, he was more than eager  to fool around with the pack . “Anything ,but tennis practice,mate.”

Rafa did demur , but gave in when told that he won’t be at the receiving end of either Nick’s bodyline or underarm bowling tactics , whatever the Ozzie maverick might dish out at Cricket champs . 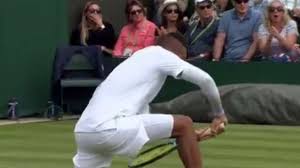 With Nick Kyrgios in, the line-up is complete, ready and waiting for 7/15 . But there are rumours. Nick  was heard telling Tomic  about how he might run Rafa or Nole out , should they get to bat with him . An old Tendulkar video featuring a straight drive that hit the non-striker on the helmet is currently on Kyrgios’ playlist. He was even seen practicing the shot at nets. Sachin and Shane have put their heads in a lion’s mouth , but the match seems on for now.