Walking under  bright sun and life-sapping humidity of an April afternoon made me hallucinate . I saw kaleidoscopic patterns  all around myself ,most of them daubed in  obscenely loud colours . Some  shades were  bright enough  to force a gasp,others were in  such a mix  as to widen my eyes . Thankfully I had my phone camera working overtime ,else I would not have later  believed what I saw on that summer noon in Salt Lake (Kolkata). 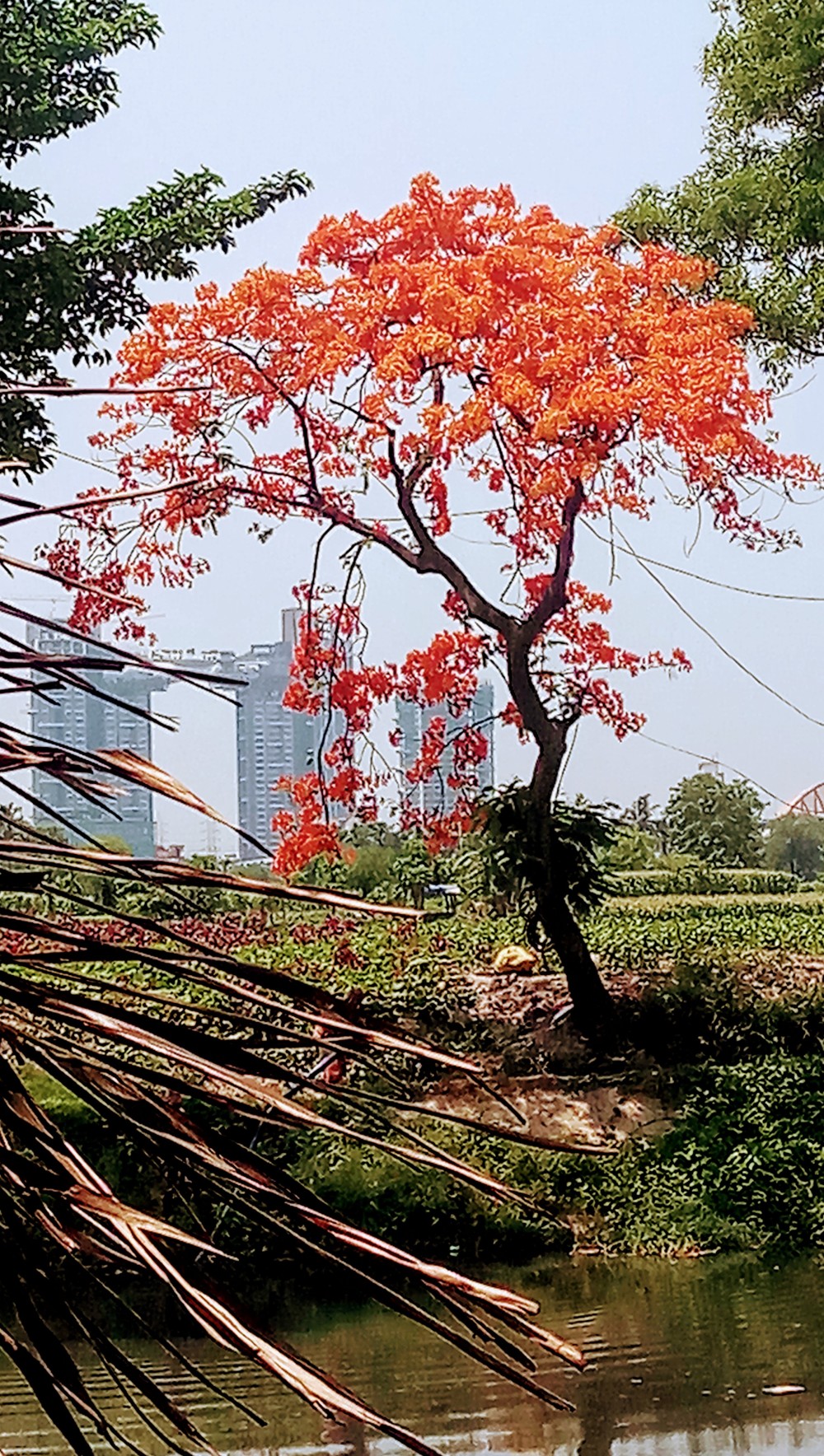 If one has to get exposed to the relentless sun, one should burn as bright as this Krishna Chura ( Gulmohar). Only tree ,besides this,which has captured my imagination is the Red Maple tree under which Brandon Stark meditates.

This tree,which i spotted besides a nullah runnning transverse to EM Bypass is perhaps the most joyful i have ever countenanced. This was also the first tree-spotting hike of my life,if only just half a kilometer long.

In and around my residence,  streets are awash with mixed hues of purple,yellow,red,orange and pink. 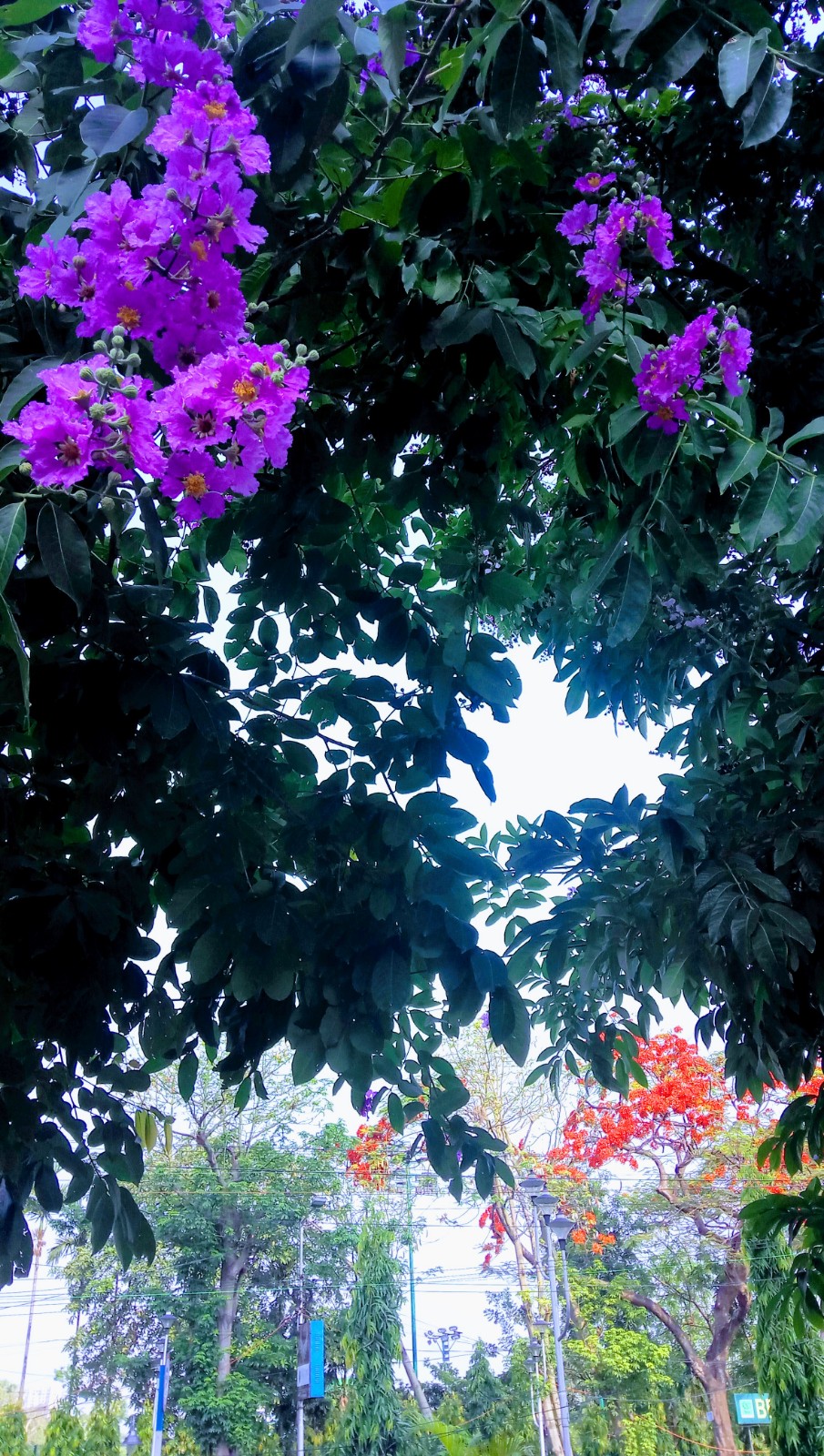 This is the season of Amaltas  and Radhachura (Yellow Gulmohar ) . They exhibit their beauty in no holds barred manner . 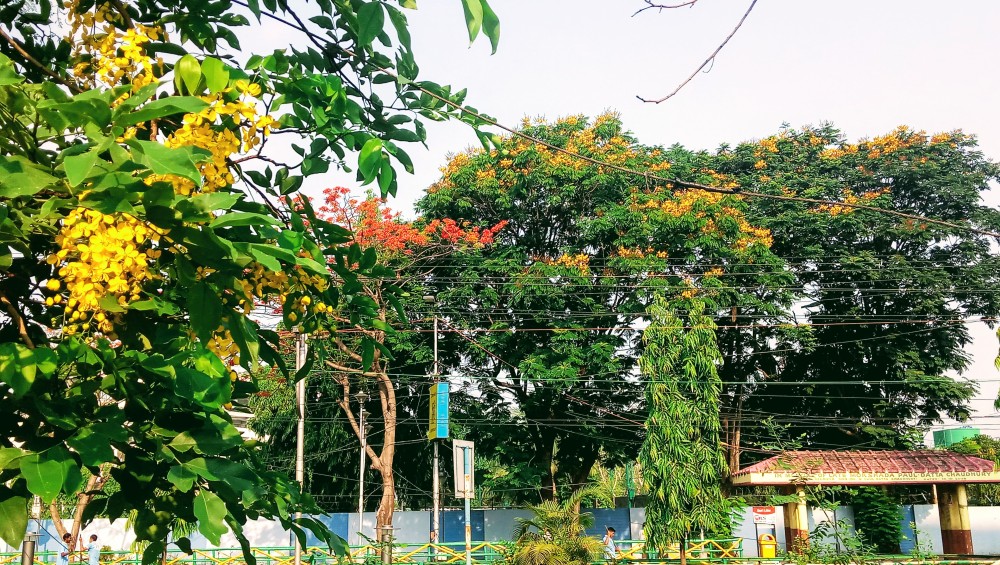 The whole street outside my flat is painted purple.  Lagerstroemia speciosa rules all the way. 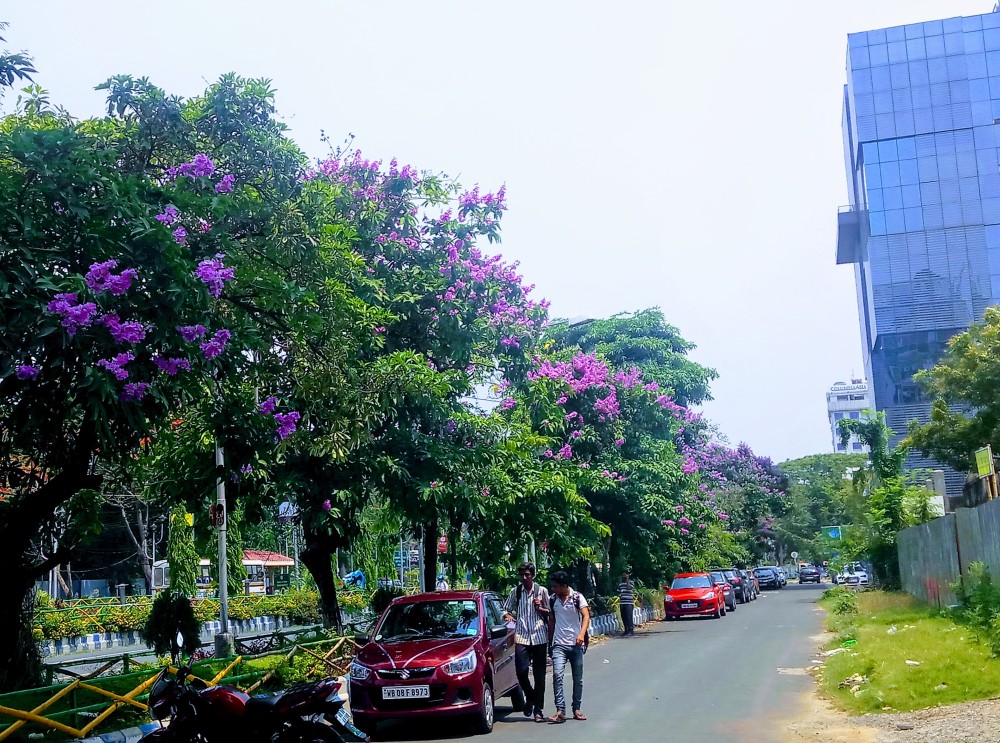 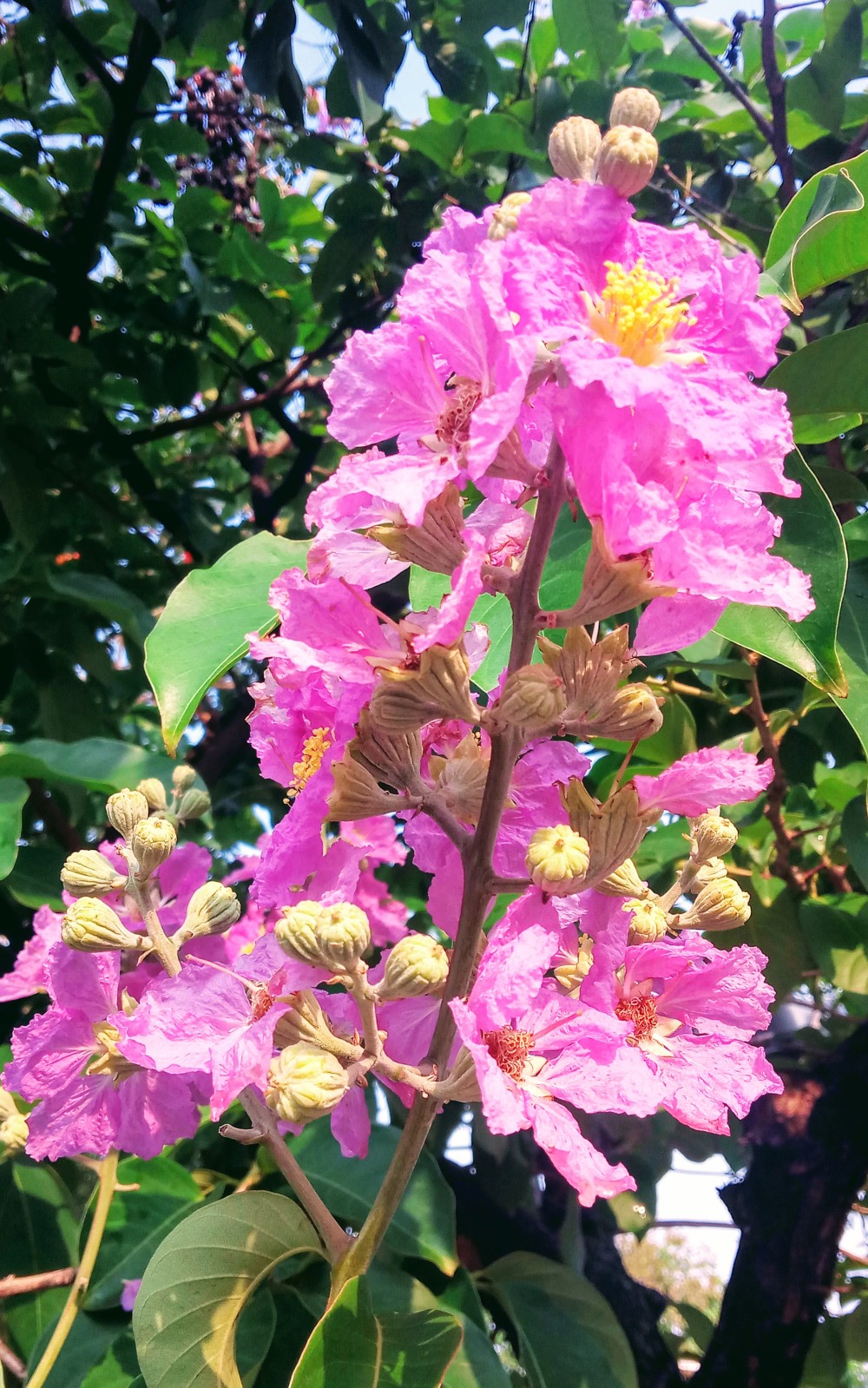 This is the flower cluster of Lagerstroemia speciosa.

Golden Rain or Amaltas or Sonajhura is everywhere. I have felt those yellow drops on me. Midas must have loved them !

Jerul & Amaltas along with Yellow hedges 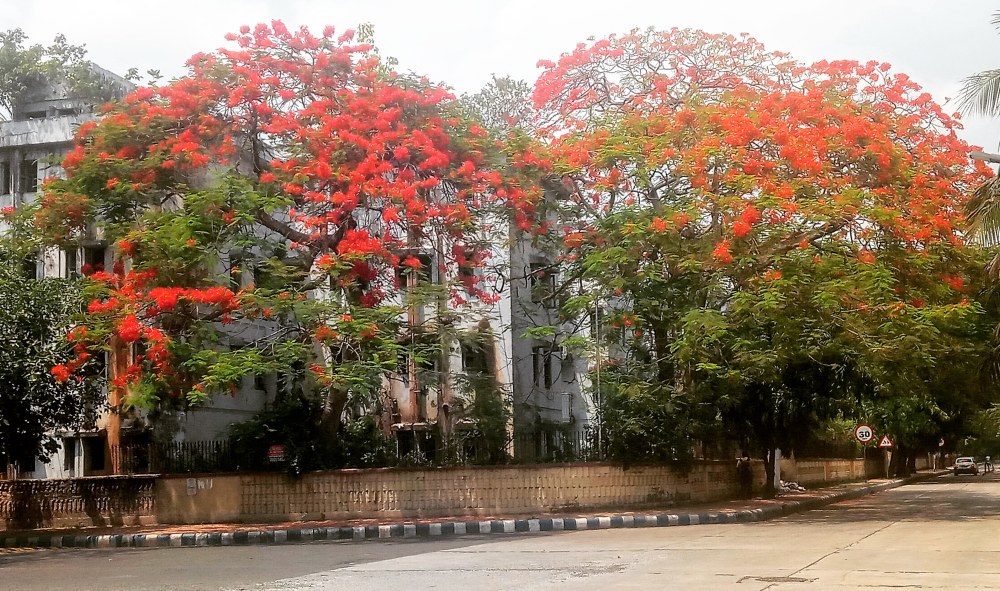 Remnants of Palaash can still be spotted .

I then stumbled upon the magnificently coloured Monkey Brush vine (Combretum rotundifolium ). Honey bees wont leave them alone. They are so inviting,even i feel like sucking their nectar.

MUSSENDA phillipica are also quite commonly visible in Salt Lake.I spotted many plants of Pink and White hues. 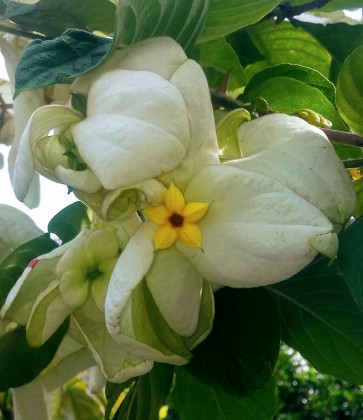 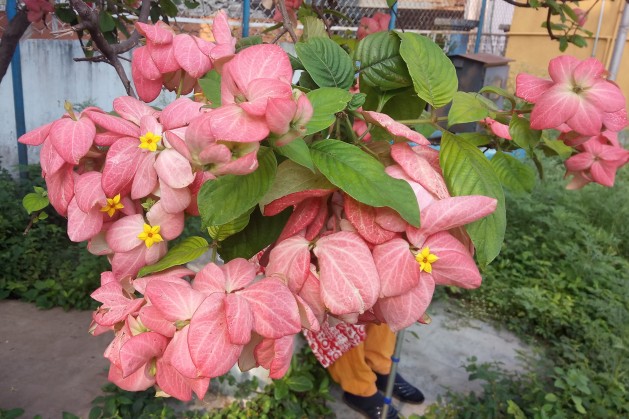 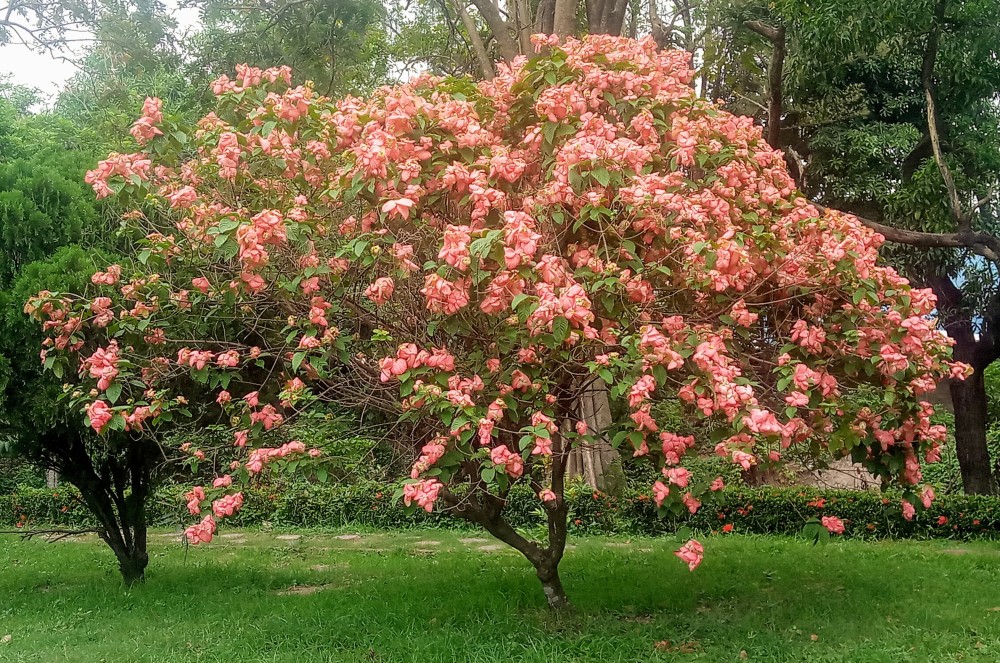 Next block has  Scarlet Cordia or Kamala Buhal in bloom.Its bright orange shade is much deeper than that of palash .

There is a Jacaranda tree in that lane as well. Its  sparsely vegetated  ,but exhibits deep indigo without much fanfare. 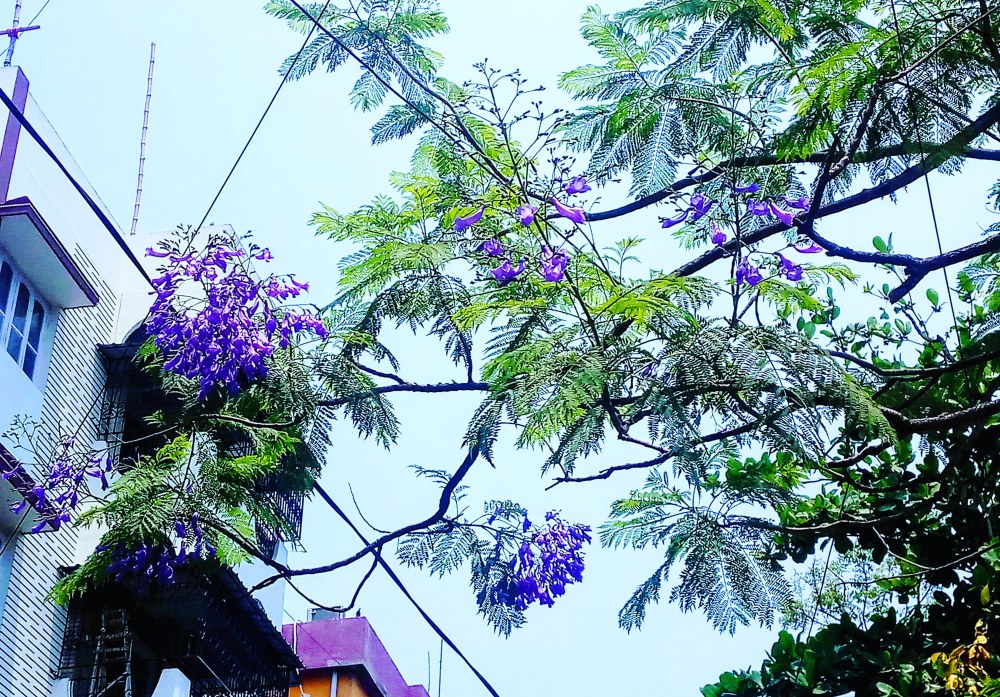 Then there are scarlet red Ixora ,called Rugmini in Hindi and RANGAN in Bangla. 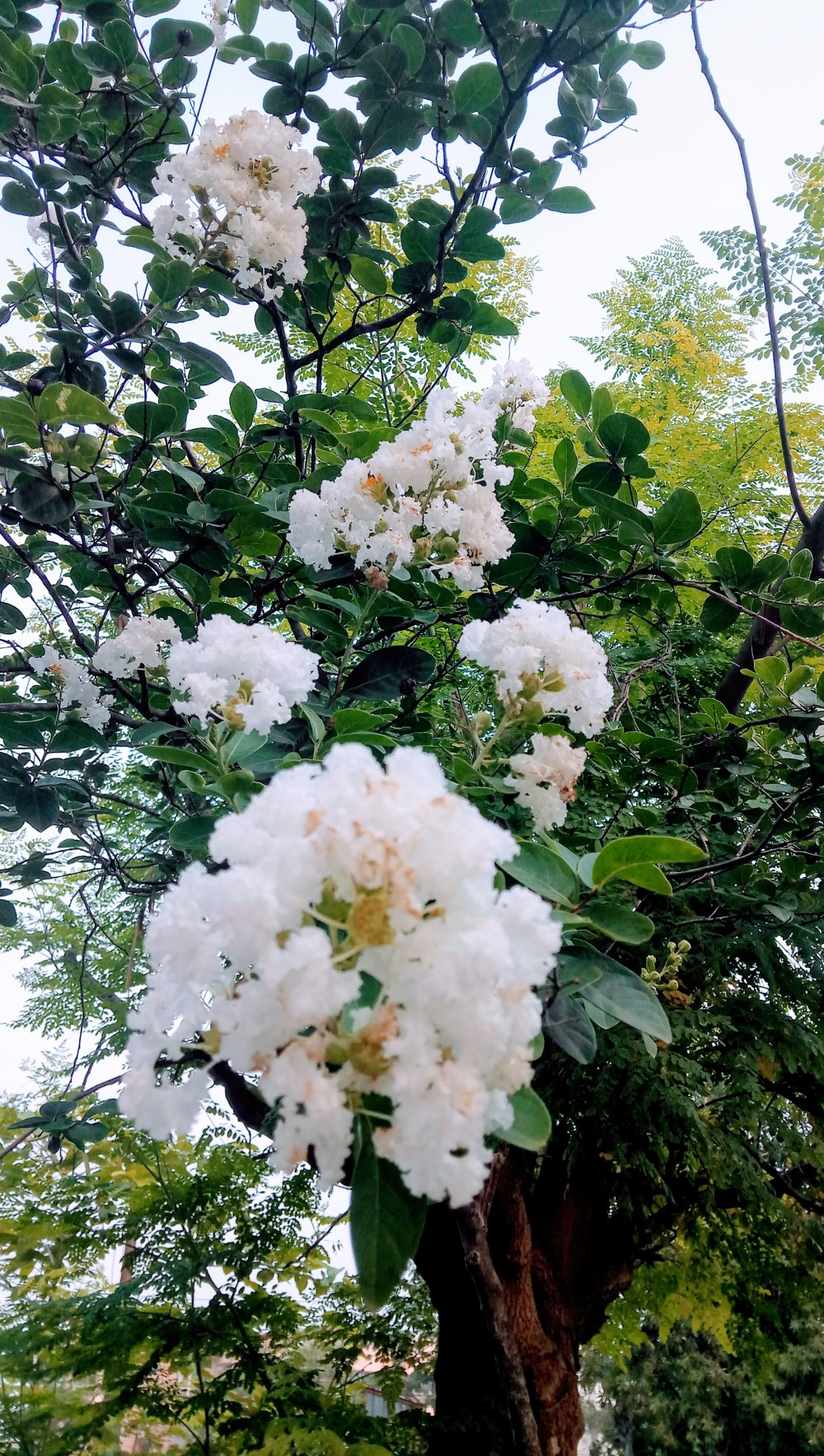 A small MIMOSA in bloom looks like feathers floating in thin air.

Cryptostegia grandilora also lends its colours to the general state of happiness.

The post would not be complete without paying tributes to MEXICAN POPPIES and MINNIEROOTS which grow without invitation ,but contribute their colours as well.

This Sangam of Radha and Krishnachura perfectly summarises what i saw. 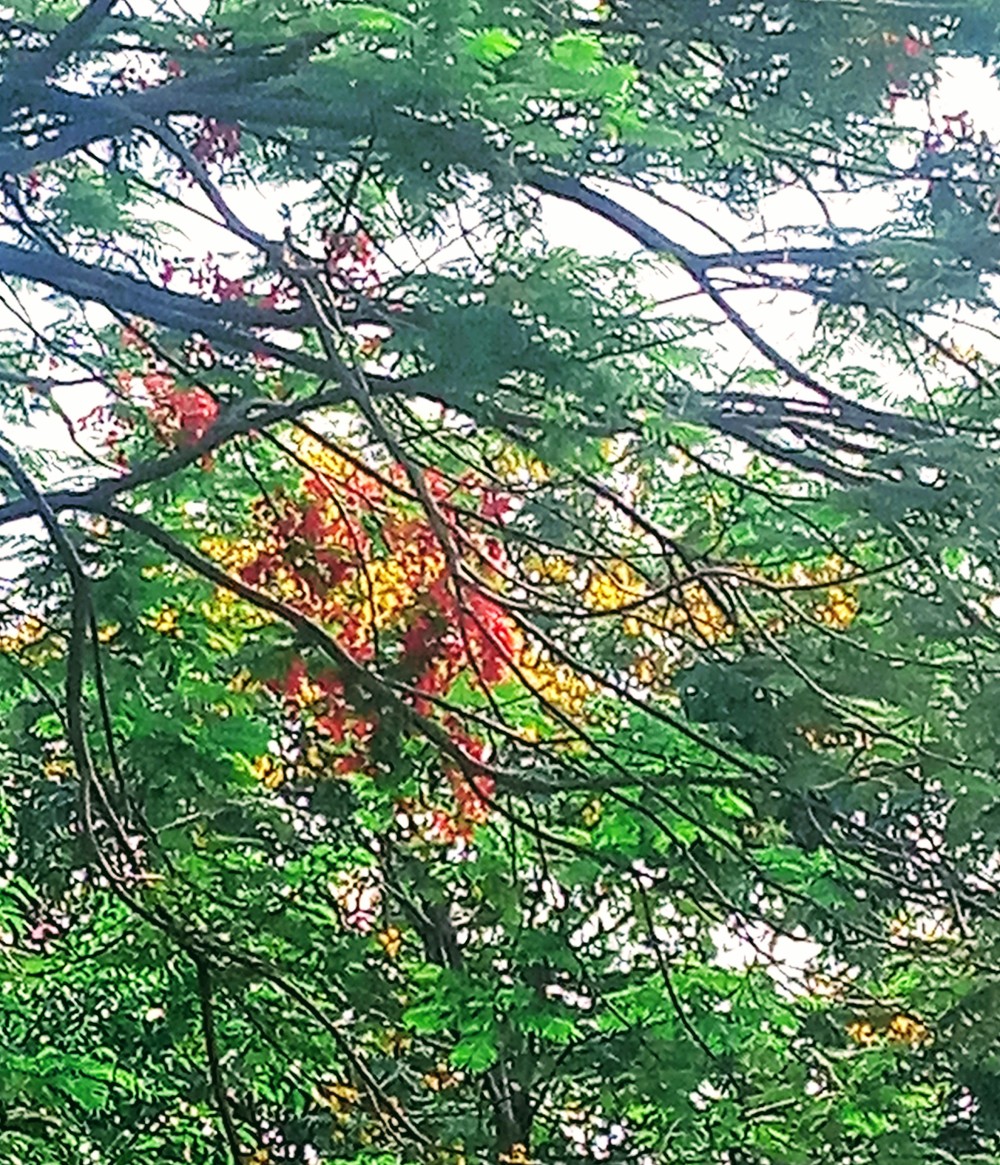 If spring arrives,can summer be far behind.The cycle continues. But nature is at bliss in all seasons. Credit must also be given to urban planners and planters of Salt Lake who have done a yeoman’s job . If i call Salt Lake my Garden Of Eden,am i far from truth ?