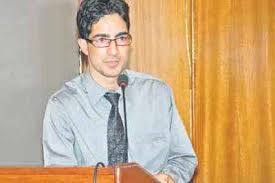 Shah Faesal is free of the Indian Administrative Service, and the service is free of Shah Faesal. Both  sides must be  quite relieved.No longer does he need to subscribe to the quaint ‘colonial era’ Conduct Rules (as per his own tweets). No longer does he need to work for what he once  derided as  ‘Rapistan’ . His fellow officers need not defend or justify their locus standi vis-à-vis Shah Faesal anymore . Bulbul-e-Kashmir has taken a flight of ambition.Whether the President of India is pleased to let  it  soar, and how soon at that  , is a small matter for consideration of mere mortals and small minds,not for Fulbright scholars,pseudo-liberals and Separatists’ sympathizers.

It was always a matter of when ,not if,  he  rids  himself of the stink of his link with the Indian  executive . His ‘rapistan’ tweet of April 2018  made it clear that he was an abusive partner in this  relationship with the state .Here was an officer bent on violating the terms of the hallowed covenant with the employer  state .The 35-A tweet in August left nothing to imagination.By comparing the Article 35-A with a Nikahnama, he displayed his clear intent and  inordinate hurry to utter the Triple Talaq to the IAS.

“You repeal it and the relationship is over. Nothing will remain to be discussed afterwards.” The meaning of this cold ,separatist threat was not lost on anyone . There was no going back after this tweet.In any case, Faesal has now admitted that he had decided to quit two years back itself. Omar Abdullah had then tweeted in his support, as he has been doing now. It was obvious who was brewing Kahwa for whom.

Ironically ,Shah Faesal ,sans the inherent hatred , is exactly the kind of  model youths  who are desired in a democratic political space. A doctor by profession,he  was the first Kashmiri to top the UPSC examination in 2010. Over the years, he worked as District Magistrate, Director of School Education and Managing Director of the state-owned Power Development Corporation. Shah Faesal recently returned from the US after completing his Fulbright fellowship at the Harvard Kennedy School.

He is sharp,articulate and is sensitive towards a lot of issues.I recall one of his Facebook post in which he questioned those husbands who find it hard to swallow that their  wives might have more successful careers than them .Shah Faesal’s father was killed by militants while he was studying for his medical entrance exams.He has suffered personal tragedy at the hands of terrorism.Such a bright young man could have been expected  become a bridge  between the  Centre and Kashmiris by working towards removal of mistrust and misunderstandings. He could have helped to ameliorate the sufferings of the people of his state.Even the Governor of Kashmir, Sh.S.P.Malik has called him a dedicated and well-meaning officer who could have served people better, had he remained in the IAS. But somewhere the script had gone wrong.Shah Faesal had embraced separatism, and gone rogue.

Did he flip after Burhan Wani was killed in August 2016 ? Or when he shrilly protested against Delhi media for  juxtaposing his image as a youth icon, to contrast with the pictures of Burhan Wani as a misguided youth ? Or did he get radicalized during his  Harvard stay when he must have realized there is a global market (eager audience) for fissiparous voices emerging from India,and especially from Kashmir ?

Charges are being levelled against him of professional and political opportunism.He is obliged to serve out a  bond with the Power Development Corporation who financed his studies at the Harvard.It seems he has taken them for a ride,like he has taken his state IAS cadre as well. Some vigilance –cum-conduct notices are also pending  against him.The President might not accept his resignation swiftly on these grounds.

As he has been repeatedly parroting, of course ,#KashmiriLivesMatter . They do, but so do the lives of Indian soldiers serving in the area. Also does matter is the territorial integrity and the unity of India. Separatism cannot be allowed to degenerate into jihad. Howsoever badly it might lacerate any son of soil’s heart, common people become legitimate targets  once they start pelting stones, and raising blockades at the sites of live encounters.

A serving IAS would have been expected to be less chauvinistic ,and a bit more nationalist in his outlook .Perhaps this is a lesson for the government as to why should home cadres not be allotted to government officers,else selfish interests and projects of self-aggrandizement start outshining every other consideration .

In his Facebook post announcing his resignation ,Faesal  talks about unabated killings in Kashmir as if he is mentioning genocide committed by Assad’s forces in Syria. Such a narrative is deemed sexy and sells well. He mentions lack of any reaching out effort, but what else have we have been doing so since 1987, and what have we achieved thus far ? What started off as a Pakistan-blessed proxy war has now  degenerated into a full fledged jihad.How do you reason with a jihadi who is bothered about his a accredited rewards in the next world ? Negotiations with terrorists do not make any sense.

He also talks about marginalization  and invisiblization of 20 crore Muslims by Hindutva forces.This is where the pain in his bosom  just overflows, and spills out .With this one comment he becomes one with Umar Khalid, Shehla Rasheed, Naseeruddin Shah and Imran Khan.This is where the hoax of all Insaniyat –Kashmiriyat-Jamhooriyat gets exposed. Such deep-seated grievances with the Indian electorate (those 31 percent) for bringing a nationalist government to power has no ameliorative.The end, my dear friend ,is jihad and it has already been successfully carried out  in the late 1980s when Kashmiri pandits were turned out of their homes or massacred.Kashmir was cleansed of almost all Hindus ,and since then even the armed forces are decried as ‘occupying forces’ by the separatists .Which is why such rancour is exhibited in streets,and Kashmir problem is seen as zero-sum game. Azadi was a decoy ,Islamization was the real ploy.

Yet for all that Shah Faesal says, I thank him that he has not yet compared Kashmir with Xinjiang or Baluchistan.There is still hope. We can still bring him back. He can still be co-opted within the democratic framework.

Rumours are afloat that Faesal might join National Conference and contest Lok Sabha elections from Baramulla.This would be a positive step from Delhi’s point of view .A young,articulate voice forming a new party or joining hands with Hurriyat would be quite a disastrous scenario, as it would hand them a youth icon to spread their pernicious propaganda . On the other hand,if he joins NC ,Shah Faesal would be co-opting with the system and would be exposed as just another opportunistic power-seeker.In an article he wrote in the Indian Express some days back,he talked about “ the  paradox in Kashmir that those who represent the sentiment do not participate in the electoral process, and those who participate in the electoral process do not represent the sentiment. Elections have been held regularly since 1996, but there is a feeling that the elected representatives are either a dis-empowered lot, a group of helpless “daily-wagers” with the Government of India or that the elected representatives are misrepresenting their electorate by not speaking out about the basic Kashmir issue. This needs to change.” If he ends up fighting the elections on a NC ticket ,he would himself be reduced to being  a ‘daily wager’. India would gain at his soul’s expense.

For now ,he has adopted a wait and watch policy.He has thanked ,but refused Mirwaiz Umar Farook’s offer to join forces with Hurriyat, saying he would like to be in mainstream politics. Well,so be it.

Bureaucrats everywhere are obviously quite interested in Shah Faesal’s moves.He has had an exemplary career so far.Now after his Harvard stint,he has  taken a leap of faith which many aspire to ,but are unable to summon courage for.It can be argued that Faesal is lucky in that he is a Kashmiri Muslim,who has at least some cause (howsoever flawed) to fight for.Being the IAS topper has turned him into a huge icon ,and he doesn’t have too much competition from among his peers posted in the J&K.Many caustic,a lot of sarcastic and a few sympathetic reactions can be gathered from  social media platforms ,especially from Group-A officers.One can also detect a tinge of jealousy,wistfulness and even awe in these responses.

Whatever one might say,it doesn’t seem that Shah Faesal is too far gone as yet .One does hope this bright young man would indulge in constructive politics and help his country and his people in marching ahead.

In a country of a 140 crores, we do care which way Shah Faesal swings because we care about Kashmir ,and voices emanating from our own paradise-on-earth . People have had too much of the political scions and separatist hawks, and might welcome a new voice. Another reason to hope for a good outcome is that  Shah Faesal has  brilliant expression, and here is  hoping  against hope, that  he doesn’t dip his pen in blood but in ink or in nectar ,and composes not death verses, but songs of good life.