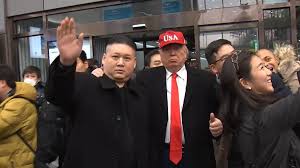 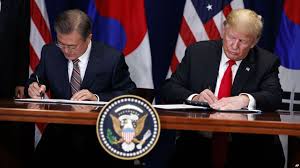 AN ICBM launched in Pyong Yang could be detected from Seoul in 7 seconds,but it would take 15 minutes if done through the same equipments positioned in Alaska.This is the simple reason why US has deployed the THAAD (Terminal High Altitude Area Defense ) system in South Korea at an expense of USD 1 Billion per year.

US lost 30000 troops in the Korean War 1950-53.Since then  American troops have been permanently posted in the peninsula towards two ends-deterrence and reassurance.They act as deterrents  to both the Koreas from engaging in any kind of expansionist misadventures.They are there to reassure their ally,South Korea,that US would be involved  in the conflict from the word go.This also keeps South Korea from exploring nuclear options. US spends about USD 3.5 Bn per year,and SK spends USD 800 million for the maintenance of these 28500 troops.

Why should we pay so much? South Korea must pay for their defence,he argues. Why do we need troops in such large numbers ? It is the basic feature of the Trump presidency to ask questions and challenge settled matters.Shake every tree.Slap everyone around.

Trump is also irked with the USD 11 billion a year trade deficit .South Korea enjoys a surplus trade deficit of USD 22 billion in trade of goods,but US also exports services worth USD 11 Bn.

The President had promised to revise such disadvantageous trade pacts,in this case,KORUS,and enhance American exports  of manufactured goods .

Of course a mere President is not expected to mount such basic  challenges to the establishment.Not just the officialdom,but the media also gets rattled.Which status quoist likes it when basic premises of policy-making are challenged ?

Bob Woodward,in his FEAR,writes about how Gary Cohen ,Chief Economic Advisor,and Rob Porter,White House Staff Secretary used to hide or strategically misplace vital documents ,which they considered to be against  national interest, from the Presidential Table .In the anarachy and disorder of the Trump White House,a document ‘out of sight’ meant ‘out of the current priorities’.Liberal media has celebrated these  misadventures by Gary and Rob,never mind if they amount to coup d’etat,akin to thwarting the will of a democratically elected President of the Republic. One such document,which they removed was related to US  signing out from the Korus.

But this out-of-mind-out-of-sight pandemonium of Presidency is also an   out-of-office-before-you-become-office- furniture Presidency.  Once  Goldman Sachs Gary and Rob Porter were out of White House,Trump brought Korus and the Peninsula back on the table.

Obama never dealt with North Korea properly.It was too sticky an issue for him. Slick liberals don’t want to get their hands greasy. But Trump took the challenge head-on. As only he can !

The duo,Trump and Kim Jong Un, had exchanged bitter barbs about being fat ,old and retarded  not in the too  distant past,but ended up meeting each other in Singapore in June 2018.This was the first summit-level meeting between the two countries. They did discuss denuclearisation and security guarantees ,as well reduction of tension in the peninsula.

The Liberals screamed murder,and wasteage of time. Of course,their darling Obama could never take the risk,or display such magnanimity or find time for talks. Sophists do not bother with actual work.All they specialise in is jaw-jaw. And here was Trump,a disruptor,who actually came down from his high horse and warmly greeted the North Korean leader.

As a means of follow-up,the Koreas have begun to engage in substantial fashion.Kim Jong Un has requested a second summit meeting with Trump.US and ROK cancelled their yearly Joint Military Exercises as a CBM. US sanctions do remain,so does the pressure on NK to take effective steps towards denuclearisation. US also wants ROK to go easy with normalisation of relations with the North. Progress on both fronts-denuclearisation and normalisation-should go together is what Trump has conveyed to the South.

In the meantime, Trump has not managed to force Republic of Korea to pay more for the upkeep of US soldiers in the peninsula.But he might curtail the number from 28500 to 22000,which would not be a strategically bad move. Trump also seems reconciled to bearing the USD 1 billion per year cost of THAAD deployment all  by himself.

But he has managed to extract some concessions on the trade front.The two countries signed a revised KORUS agreement in September 2018.  The new version removes a  few regulatory burdens for US automakers to export cars, extends a 25 percent US tariff on imported Korean trucks, and lifts a cap on US car exports to South Korea that don’t need to meet Korean safety standards (caps that American automakers weren’t anywhere close to reaching).

US also agreed to exempt South Korea from its new tariff of 25 percent on global steel. Instead, South Korea accepted a quota to limit steel exports to the United States to 70 percent of what it was selling before.

This deal might not just give Trump what he wants- a token victory in trade negotiaions and boost for steel manufacturers –but also usher in an era of peace in the peninsula.