India is obsessed with China’s development story.We are not only jealous of their military might and economic growth,but also the influence they wield all over the world.But they are  a fundamentally different system from ours,and it doesn’t pay much to compare our indicators.

Let us take a look how and why –

BY 2020, the Chinese would be completely monitored under the system of  permanent scanning .Along with their SKYNET Surveillance Project for urban public areas, launched in 2005,they have also introduced XUE LANG (Sharp Eyes ) project to keep an eye on the country folks .Sharp Eyes has been adopted as a primary goal of the CPC. SKYNET systems use Artificial Intelligence and Facial Recognition Technology (FRT) to identify and intercept criminals .The plan is to integrate these urban public surveillance systems with the private ones,installed at homes,banks,shops,malls,business concerns and vehicles.Along with this ,the most ambitious initiative  is the Sharp Eyes project which has been introduced with the idea of appropriating TV sets and smartphones of the civilians to enhance the extension of surveillance systems to households and individuals.Then locals would be asked to keep an eye on their neighbours and report in case of any suspicious or mala-fide activity. This culture of mutual surveillance  is expected to cause a  a remarkable cut-down in dissent and enhance socio-political stability. Law enforcement and traffic regulators  are set to benefit ,of course,but this  also sets the government up as ubiquitous and omnipotent.This is also a dream scenario for research in Big Data,AI and FRT, which require a lot of test-worthy data without fearing  much regulation.Any sort of dissent ,devious behaviour or criminal activity cannot now escape the prying eyes.Even Orwellian Big Brother was not as intrusive.

But this is China.

Back home, India is witnessing quite some hullaballoo over  Adhar and the potential use of its data  in criminal investigations.Its not as if China is unique in this regard,since US and UK are also using FRT to track criminals.But it’s the intent ,scale and  scope of the Chinese that is shocking.

I  would rather sing Saul Hudson’s (Slash) song Chinese Democracy than actually rail against the lack of  it.For a one-party state, CCP is indeed quite responsive towards each  trend of dissent ,howsoever small it might be. Xi Jinping’s drive against corruption has strengthened his hand,so much so that he has now even removed the two–term limit and set himself up as the President-for-life.Do we hear dissent ? No ?  This should put an end to the pursuit of democracy in China.

Then there is Hukou system of household registrations in vogue in China ,which perpetuates regional and class inequalities.There are rural as well as urban hukous ,and it is not very easy to convert your  registrations.Hukou of a city  entitles you to access  all normal services provided by the government in that city — education, health care, insurance, etc.Which means if one migrates from a rural area to that city,he is not entitled to these basic government services.While the rural hukous entitle its holders some rights over their lands,urban ones assure pensions and social welfare.There is a  lot of resentment over the implementation of this system ,but it persists with some minor modifications.But it has served China well over the decades.One look at Mumbai or Faridabad and we can appreciate how vital was it that the government exercise some sort of control over rural  migration to cities.The Chinese must also be  having many reasons to protest against the  Hukou System ,but know better than that .Or rather they understand  that the government knows better .

The Gaokao system ,also called the National College Entrance Examination ,causes a lot of anxiety ,pressure and heartburn among millions of students and their guardians every year.Not only is the examination very tough,rigorous and competitive,regional and local quotas in selection to various colleges ,result in perpetuation of inequalities as well.There are a lot of disparities in educational standards across regions and cities,but what can be done?The Edifice has no time for minor problems.

What has been happening in Tibet has moved the whole world.For past sixty years ,the socio-political freedoms of average Tibetans have been crushed .Their own political systems are long gone.There is no freedom of religion,speech or movement.Monasteries have been shut down on the whims of local officials.Dalai lama lives in exile,and the CPC interferes in the matter of faith and succession.

Hong Kong has also seen massive Chinese suppression since the latter gained control in 1997.There has been a major clampdown ,and dissent has been outlawed.Piece by piece,all autonomy of Hong Kong  has slipped away and it has become just another province of China. It is locked in an epic struggle for democracy for almost an year now, and yet, who cares ?

Xinjiang is a case study.

China has shown the way. The problem of radical Islam is not unsolvable by the way.

Reeducation,reorientation and indoctrination camps have curbed the morale of  Uighur Muslims.The Uighurs  pretentiously call this area as East Turkenstan .There has been massive resettlement of the Han Chinese in the region.Surveillance cams have been used to keep an eye on dissidence and separatists have been brutally crushed.Predictive and preventive measures have been taken .Bans have  been imposed on wearing of burqa by Muslim women,keeping beard by the Faithful and observance of Ramzan fasts .Gene-washing has been resorted to on massive scale by forced copulation  between the Han men and  Uighur women.Xinjiang is an example of how Han China completely crushes dissidence.

7.)WHERE DO I COMPLAIN

Facebook is banned in China.Most locals use Weibo instead.Google is banned as well.Baidu works  just as fine.Even Amazon has failed to find feet in China as 80 percent of the market is controlled by Alibaba. Internet censorship and surveillance have been in vogue for long ,and is tightly implemented in China .The  locals used it to  review social websites like Gmail, Google, YouTube, Facebook, Instagram and others,all of whom have been banned . The excessive censorship practices of the Great Firewall of China have now engulfed the VPN service providers as well.

This is the truth of China.Do we need to discuss how India lags far behind ,on account of cheap populism,corruption and lack of will  to succeed.This is the country we are up  against where rights do matter,but more as doles from the state, and not as means to keep the society hostage . 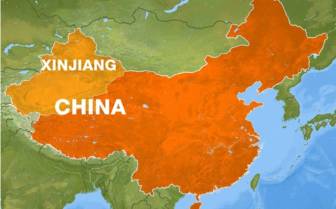