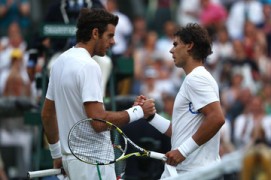 No one has ever beaten Roger Federer ,Rafael Nadal and Novak Djokovic in the same Major.There is a theoretical probability that this might happen at the Wimbledon 2018.Juan Martin Del Potro of Argentina is slated to take on Rafael Nadal in the quarter-final tomorrow.It is likely that the next opponent of the winner of this match would be Djokovic in the semi-final and then Federer in the final. Delpo ,thus, has a chance of overcoming the winners of 49 Grand Slams, and in process delaying the collective tally of Big Three from touching 50 for some time atleast.

The winner of the match between the 5th seed Delpo and 2nd seed Rafa shall take on the survivor of another quarter-final battle between a resurgent Novak Djokovic,seeded 12th and Kei Nishikori,24th .Delpo has a 5-10 head-to-head vs Rafa ,and has also lost both their duels on grass, one of them in the round-4 of Wimbledon 2011. In the last match they played in June 2018,Nadal overcame Delpo’s challenge in the semi-final at the Roland Garros .Rafa also tactically outwitted Delpo in the US Open semi-final in 2017.The London weather has kept dry so far and the resultant true bounce of the courts make Nadal a very dangerous competitor in the second week. But if Del Potro somehow manages to find a chink in Nadal’s armour ,he might have a shot at Djokovic. Now ,the Serb has a 13-2 record versus Nishikori ,and has won last 12 matches of their matches. It would not be far fetched to expect the former to prevail .

Juan Martin trails behind by 4 wins to Novak’s 14 in their head-to-head contests. They have met twice on grass, and have shared the honours.Delpo beat Novak in the bronze medal match at the 2012 London Olympics.But Novak avenged his defeat in a memorable five-set epic in the semi-final at Wimbledon 2013.The duo have played keenly contested matches on hard courts as well. At the 2016 Rio Olympics, Delpo ousted a tearful Novak in the first round itself .If the two have a semi-final face-off this year, another duel could be on cards.

Roger Federer, on the other hand, is in imperious form. The defending champion is scheduled to play Kevin Anderson in the quarter-final, and if he advances, he plays the winner of Milos Raonic vs John Isner in the semi-final. The three big servers can pose a big challenge to the master, but given the kind of touch he has been in the last 18 months, it is widely anticipated that Roger would reach the final to be played on July ,the 15th.

As things stand ,it would be a herculean task for Del Potro to beat a fit and cruising Rafa, and then overcome a hungry-again Novak ,who is gradually returning to his old self. But if there is one player who has consistently competed on equal terms, if only in attitude and not reflected in statistics ,against the Big Four (Roger, Rafa, Novak and Andy Murray),he is Juan Martin Del Potro. On his way to his only Grand Slam success at the US Open in 2009,he performed the scarcely believable feat of ousting Nadal in the semis and then Federer in the final. In the US Open quarterfinal 2017,Delpo beat Federer and then took the first set off Nadal in the semi-final ,before the latter rallied and won the match in four sets. Del Potro remains the only one besides Novak Djokovic (US Open 2011) who has beaten both Roger and Rafa in a Slam.

If he manages to somehow conjure up wins versus Rafa and Novak, then a possible (likely) final against Federer beckons. The world number One is chasing his 21st Grand Slam title, and is 18-7 versus Delpo head-to-head. They have played twice on grass, and Fed has won both times. In their last four matches, Juan Martin prevailed at last year’s US Open, but lost at Basel and Shanghai this year, and then in the last one at Indiana Wells, defeated Roger .Point being, its obviously an uphill task for Delpo to win against even one of the Big Three, but, as FDR would have loved to say ,‘it can be done’.

In the past 27 Wimbledon championships held since 1990,there have been very few instances of the eventual champion requiring to beat three top-guns in the quarter-final,semi-final and final to lift the trophy. In 1991,the sixth seeded Michael Stich overcame the fourth seeded Jim Courier in the quarters, top seeded Stefan Edberg in the semis and eventually the second seeded Boris Becker in the final. In 1993,the top seeded Sampras beat Agassi (8th),Becker(4th) and Courier (2nd) in his last three matches to win his first Wimbledon. But perhaps the biggest fairytale got scripted in 2001,when a wild card entrant, the three-time finalist in 1992,1995 and 1998,and the crowd favourite, Goran Ivanisevic, defeated Marat Safin (4th) in the quarter-final,Tim Henman (6th) in the semi-final and Patrick Raftar (3rd seed) in an epic final. Del potro ,the fifth seed has a unique opportunity to beat Rafa (2nd),Novak(12th) and Roger(top seed) and perhaps essay a campaign which might be considered as one of the greatest in the history of the Championship. It goes without saying that Nadal also has a very tough road ahead (Delpo/Djokovic/Federer) if he is to win his 3rd Wimbledon and 18th Grand Slam.

Juan Martin Del Potro’s is not quite a story like Goran Ivanisevic’s ,and he certainly doesn’t enjoy that kind of a history or relationship with the All England Club .But the story of the gentle giant from Tandil,Argentina is not any less inspiring. It was in 2009 that Delpo took the tennis world by storm when he defeated Nadal in the semis and then Roger in an epic final of the US Open. He soon reached number four in rankings, and it was acknowledged that his talent placed him alongside the Big Four .Then the wrist gave away and he opted for a one surgery after another. His left wrist has played havoc with his career. Three surgeries and three comebacks in the last six years have kept Delpo out of the game for long periods, and yet in the hunt of the game.

The third surgery was performed in june 2015.Dejected ,despirited, Del Potro went through a dark phase, having lost all hopes of a comeback and watched his career pass by as he grappled with the vagaries of life. The temptation to quit was real. How many surgeries could a wretched wrist withstand ? Tears used to well up in his eyes when he saw other players compete, while he lay on his hospital bed, recuperating. Commentators and analysts lamented over the unfortunate waste of supreme potential .Delpo assumed the status of the most unfulfilled talent in tennis history. Perhaps some fountains of talent can’t just wither away. Come what may,they find a way to gush out of obstacles. Against all odds, surprising himself ,Juan martin del Potro found himself back on the circuit in February 2016.He beat Novak Djokovic and Nadal enroute to Silver medal at Rio.He also defeated Murray and Cilic in two epic five setters in Davis Cup ties as he helped Argentina win their first Davis Cup in 2016.The subsequent year saw him climb to number 11 in the rankings. In 2018,he has managed to re-enter the top-5 in ATP rankings on the back of some solid performances like winning his first ATP Masters title at Indian Wells, reaching the finals at Miami Masters and semi-final at French Open. There is heavy buzz around Del Potro these days as he finds his way on the English grass.

His serve is a very reliable weapon. He has been remarkably accurate with his first serves and generally his second ones have bailed him out too. That flat sledgehammer forehand which seems more like a slap can resolve any negotiation in a trice. His two handed backhand has much more power in it than was the case, two years go. For a player who hits the ball so hard, he is remarkably accurate. He is moving well,and his knee and wrist have held so far. Delpo is going about his business in a very calm and composed manner.

The ‘What-might-have-been’ lament has given way to a wistfully romantic expectation leading fans to look forward with excitement ,every time he takes the court. One who was expected to be the Champ, has now been transformed into a champ-slayer . But back again in the top league, and touching almost 30 years of age, Delpo must be itching to add a few Slams to his solitary US Open .

All with a hint of dread, for the left wrist and the knees can be treacherous ! But there is no doubt that he will give his all versus Rafa in the quarter-final to be played on July,the 11th.One can only hope for some great tennis from both ends.