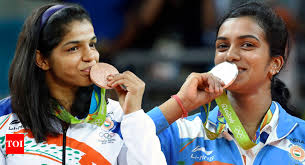 Indians seem to be quite ashamed of their contingent’s performance at Rio Olympics .But a close look at the medal tally reveals that most of South Asia,South-east Asia,and West Asia have hardly performed well . Infact ,leaving aside the US,Europe,China,East Asia,Iran ,Argentina,Jamaica,Kenya,host Brazil, Australia, Cuba,Canada ,NewZealand and North Korea ,most of the nations turned out to be mere participants.

Lets take a look at the final outcome for SAARC nations – India managed to win 2 medals,but participants from rest of its seven countries (Pakistan,Sri Lanka,Bangladesh,Afghanistan,Nepal,Bhutan and Maldives) have come back without any success against their name.

ASEAN countries have more of  sporting potential than India. Afterall, Malaysia and Indonesia are Badminton powerhouses  & Philippines and Thailand generally fare well  in boxing .How many medals did the ASEAN block manage to win? Just 18 in total,the break-up being 5/10/3.

Thailand 2/2/2- 2 golds,1 silver and 1 bronze came in Weighlifting,which seems a tad surprising .A silver and a bronze were earned  in Taekwondo.

Indonesia 1/2/0 – gold in badminton and two silvers in Weighlifting.

Malaysia 0/4/1- 3 silvers in Badminton,one medal each in Diving and in Cycling.

Philippines -a silver in Weighlifting

Isn’t this surprising that 2/4/1 , i.e. a total of 7 medals were won in Weighlifting .Badminton contributed a further of 4 medals-a gold and three silvers.

Bahrain won a gold and a silver ,both in Athletics. Both these medals were won by Kenyan imports.

UAE won a bronze in Judo courtesy a Moldovian import.

Qatar won a silver in High Jump courtesy an athlete born in Doha,but having Sudanese parentage.

Saudi Arabia, Oman,Iraq and Kuwait didn’t win any medals at the Rio games.

China, Japan and South Korea are sporting superpowers. North Korea (2/3/2)  proved that investment is not everything ,race might have some role to play in winnability  too . These golds and three silver medals came in Weighlifting.

IT SEEMS SHOCKING THAT WHILE NORTH KOREA,THAILAND,INDONESIA and PHILIPPINES  reaped a rich harvest of medals in Weightlifting ,INDIA ,which won a silver in 2000,and a bagful of medals at the 2002 Commonwealth Games is nowhere in the picture .

I  took a look at some other non-GCC,non-former USSR nations.

IRAN won 3/1/4 – 2 golds came in Weightlifting. A gold ,a silver and three bronze in Wrestling.

Weightlifting gave them a silver as well.

A close look at the performance of these 32 Asian nations reveals that they won a total of 44 medals(11/18/15). Atleast three of these medals were won by imported players .

Without delving much into RACE , it seems clear that most of the Asian medals (including the Singapore gold) have been won by the Mongloids (China,SK, NK ,Japan). The imported athletes who emerged successful were Afros/Negroids.It seems that vast humanity from Lebanon to Philippines have fared extremely poorly at the Olympics.

What is also obvious is that India seems to have ignored Weighlifting, underachieved ( by atleast a medal , maybe two ) in Badminton, flopped in shooting and made a mess of  Wrestling prospects .Judo is also something that we should look at. Boxing somehow seems missing from Asian DNA, so is rowing . As for dreams of winning a medal in athletics,I think we should not expect medals there,unless we have the capability to import some talent from Africa. Our focus should be on Badminton,Shooting ( since there is a lot of craze for it , but its not very productive or predictable ),Tennis,Wrestling, Weighlifting, and on grooming some selected performers in Athletics, Archery, Gymnastics, Boxing , Judo and Rowing .We need not be ashamed of our own performance , though. We hail from a continent of losers ,or maybe we should classify ourselves as just ‘honourable participants’.