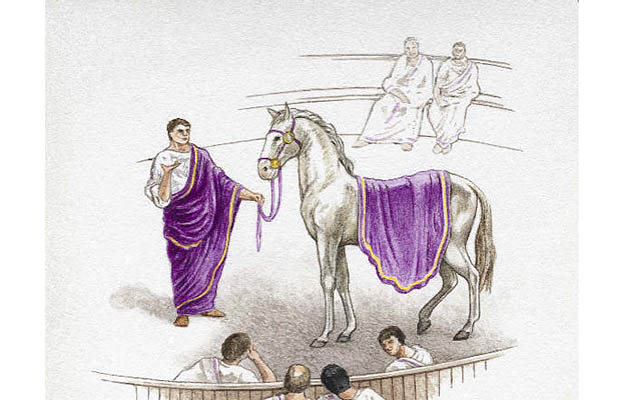 A horse carrying the BJP’s Flag shall roam the land, conquer territories and rid the country of Congress .
“Ashwamedh ka lakshya hai Congress-Mukt Bharat ”.
Horse-trading is being reported in Uttaranchal, in what is being interpreted as the Third Act of the Ashwamedh drama being played out in the state.

In the first one, Shaktimaan, the horse, was thrashed by lathis by a party MLA.It seems that the overzealous,lumpen MLA attempted to sacrifice the horse even before the poor beast had a chance to trot around the country as part of the Yajna ritual.

In the second,the horse’s leg was amputated and the perpetrator arrested. With the lathi-wielding public representative in jail, his party was left one short of the majority in the Assembly, thereby jeopardizing their chances of staging a coup against the Congress government.

The Third Act began with horse-trading in Dehradun. BJP has already staked its claim before the Governor claiming the support of a majority of MLAs. Meanwhile,the Congress CM has declared that he is going to follow in the footsteps of Caligula and nominate Shaktimaan to the Assembly. Caligula was Italian after all,and anything Roman is sacrosanct for the Congress.Would this be enough to save the Congress govt?

The Ashwamedh in Uttaranchal is nearing its conclusion, and the dream of a Congress-Mukt Bharat is closer to realization than ever before. Animal Rights’ activists have decided to protest against this forcible political baptism of Shaktiman ,the amputee .This cruelty cannot just be “tolerated”. A horse should not be pulled down so much that it transmogrifies into a politician. Jonathan Swift might have imagined Houyhnhnms (intelligent horses) as a class ruling over humans in his Gullivers’ Travels, but surely he had not bargained for an individual horses’ Right of Refusal.

Incitatus was sent inside the Senate as a joke. Shaktimaan might also just turn down the offer. Horses have their morals, and value systems intact.

Postscript- Shaktimaan passed away shortly after I wrote this blog. The MLA is still alive.