This is the link of the match details and scorecard on ESPNCRICINFO. 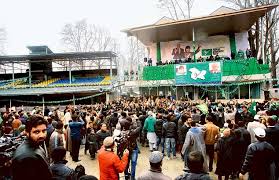 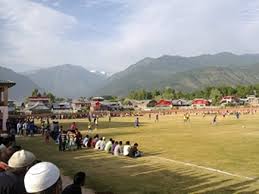 Sher-e-Kashmir Stadium ,Srinagar hosted a One Day International match  on October 13th,1983 between the recently crowned  World Champions India,led by Kapil Dev, and and the mighty West Indies ,led by Clive Lloyd.

The Windies squad boasted of Viv Richards, Desmond Haynes, Gordon Greenidge, Michael Holding, Malcolm Marshall,and Andy Roberts,while Indians had Kapil,Gavaskar,Vengsarkar,Shrikant,Sandeep Patil and Kirmani. This was a more star studded lineup that even an Avengers film might boast of.

The Kashmir situation was in a fast deteriorating phase , and locals were getting increasingly radicalized .How sensible was it  to hold a ODI in Srinagar in such an atmosphere is anyone’s guess ?
On a pitch that was wet because of the overnight condensation, the Windies won the toss and put India to bat.
From the moment the Indian batsmen took guard, cricket became secondary and vituperative politics assumed the centre-stage . A very hostile crowd, spurred on by the Jamait-e-Islami thugs, started chanting anti-India slogans. Indians could not play freely on the damp pitch and kept losing regular wickets .The audience loudly cheered the fall of every Indian wicket, and booed them whenever every run or boundary was scored.

Slogans like Pakistan Zindabad (Long live Pakistan) and India Murdabad (Death to the Indians) shocked both the teams .Neither side had expected this kind of response.  Indians  were all out for 176 runs in 41.2 overs. Shrikant somehow crawled to team’s highest score of 40, while Harper claimed 3 wickets.
During lunch hour,a group of hooligans attacked the pitch and attempted  to dig it. But they could not inflict enough damage for the match to be abandoned . Soon enough,the Windies began their chase.
Indian fielders faced choicest of abuses  from the crowd.Bottles,stones and invectives rained on the “home” team like hellfire . Every run scored by Windies was cheered  .Sunil Gavaskar,while fielding, was targeted with verbal missiles and shown a large-sized poster of Imran Khan. Sunny tried to indulge  the spectators for sometime but could not carry on the charade for long .

The then CM of J&K ,Farookh Abdullah was present throughout  the match,but never once did he try to control the situation. Post-match,he did apologize to the Indian team, but that counted for little when deep scars had already been inflicted . This says a lot about the character of the man who silently blessed  the wild,unruly behaviour of his electorate  in a stadium named after his own father.

West Indies eventually won this rain- curtailed game without losing even a single wicket .But more than the result ,what mattered  was the crowd behavior .Captain Kapil Dev considered pulling out the team  midway,but then decided to continue as it would have been very embarrassing for the Indian management and administration . The ever diplomatic Sunil Gavaskar later played  down the incident ,but the message from Srinagar was loud and clear .

Those who blame the rigged Assembly elections of 1987  for insurgency conveniently turn a blind eye towards such incidents. What did Indira and Rajiv governments do between 1983-89 ? Did they try to reverse the slide ?

The genocide of Kashmiri Pandits which began in January 1990 didn’t come as a surprise to anyone .The Indian state was not just a mute spectator ,rather was a tacit  contributor with their conspiracy of inaction.
Was this ODI then the end of international cricket in Kashmir ?
No,sir. Magnanimous Indian Government took one more chance. This time ,India hosted Australia for a ODI in 1986.

By then the situation had worsened a lot,and in fact had  gone completely out of control. Players were fortunate that  terrorism had then not been institutionalized yet ,else their safety would have been at stake . Crowd behavior was abominable, and India lost the match. But  Srinagar lost not just cricket, but even remnants of peace after that.
The Sher-e-Kashmir Stadium was occupied by the CRPF for 18 long years,and Kashmir got  drowned in floods of insurgency. India has gradually developed Dharmasala as a cricket venue in the hills.Holding an international match in Srinagar is not even a distant dream anymore. Most international teams do not send their teams to Pakistan.Jihad and cricket cannot go together. The loss is Kashmir’s, but do the locals, blinded by the lure of Jihad care?