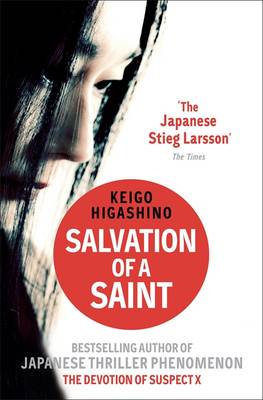 SALVATION of a SAINT  2008
By
Keigo Higashino

An engineer who hatches murder plots on the lines of  strategizing for chess moves ,has tried to create a situation of a perfect murder in “The Salvation of a Saint.”
The CEO of an IT company is found dead .He died by poisoning, in his own apartment ,by his wife’s assistant at her patchwork classes,while the  wife was away at her parents’ home . This assistant was his lover and was carrying his child. The husband and wife had been married for an year and were on the cusp of divorce,with the wife’s inability to conceive being non-negotiable for the husband.
Before marriage itself ,the CEO had laid down a condition before his wife  that were they unable to have a kid within  an year,they would then split up .The husband has been portrayed as a smart and a charming guy having  a playboy streak ,and possessing  a fixation for having kids.Apparently,he saw women as mere child-bearing machines,and saw no point in continuing a relationship  if they could not produce babies.
As the plot thickens, and the murder is committed,old guard of Dt. Kusanagi and Dt .Kishitani appear on the scene,aided by the lady Dt.Utsumi.As the case appears to be going nowhere, arriveth Dt.Galileo,aka Yusawa on the scene,who brings his trademark physicts’ approach to the case.
Keigo Higashino has a lucid narrative style in which he sometimes switches to first person with great effect  . His emphasis on police procedure, forensics and what goes on in an ongoing investigation and how detectives think and follow-up on their ideas and  leads render his writings unputdownable.
For someone who loves to read murder mysteries,Salvation is a major treat,and should be compulsively devoured.